WebsterX’s ‘Daymares’ and its possible impact on MKE music

WebsterX’s ‘Daymares’ and its possible impact on MKE music 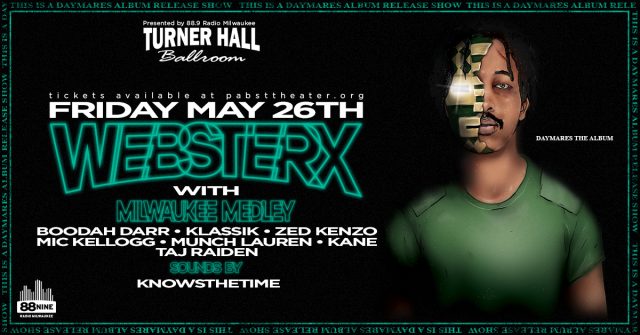 The upcoming album by the MKE rapper, as well as his recently announced show at Turner Hall, are big moves for MKE hip hop

On this edition of Tap’d In, we talk to Piet Levy about the upcoming release of Milwaukee rapper WebsterX’s debut album Daymares, as well as his recently announced headlining at Turner Hall, which features a diverse list of Milwaukee openers. We also talk about the possible success of the album, and what that may mean for the future of the Milwaukee music scene.

Every Thursday morning, Jordan Lee and Milwaukee Journal Sentinel’s Piet Levy talk music events and concerts, local and national. Sometimes their discussion is about music news or music venues. Tap’d In airs every Thursday morning. It also lives online. Forever. See below for Tap’d In audio and a short synopsis.

Additionally, we discussed some great local shows for Milwaukee music fans this week, all on Tap’d In. Listen to the player above for more information, or check out any of the links below

Puddles Pity Party at Colectivo Back Room, March 24 and 25

The Lumineers at the BMO Harris Bradley Center, March 25

WebsterX at Turner Hall Ballroom, May 26