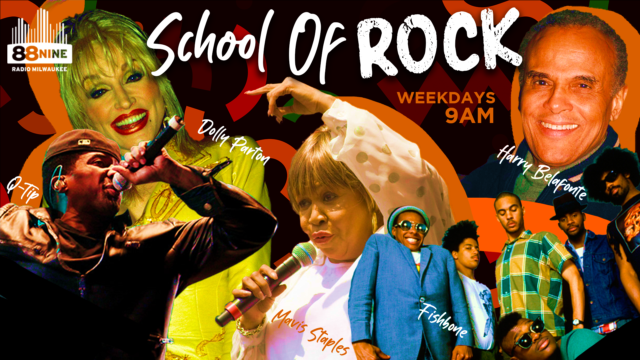 Get your kids up, put away the tablets and sit them down in front of the radio. Dori Zori will teach them about the musicians that have shaped our world — from Bowie to Bjork, Prince to Presley — and, of course, fill the hour with lots of their music.

Listen live on the air weekdays from 9 to 10 a.m. for Dori’s lesson, focused on a different artist every day. We’ll post it here, too, in case you missed it, along with each day’s lesson plan, written by certified teacher and Milwaukee artist, B~Free and other 88Nine staff.

Fishbone has been described as one of the most distinctive and eclectic alternative rock bands of the 80s, playing a fusion of ska, punk, funk, metal, reggae and soul. What a combo! You may not be super familiar with this band, as they never really had a mainstream audience. Fishbone did and does have a large cult following though, and we’re going to find out why.

The band started in 1979 while the Fisher brothers were in junior high. With their friends Angelo, Christopher, Kendall and Walter they made up Fishbone. Instruments consisted of bass guitar, guitar, drums, trumpet, trombone, saxophone, keyboard and theremin. For those of you unfamiliar with the theremin, it is an electronic instrument with antennas that one plays without ever coming in physical contact with. Cool, huh?

Harry Belafonte started his career in music as a club singer in New York to pay for his acting classes. As a matter of fact, the first time he appeared in front of an audience, he was backed by the Charlie Parker band, which included famous jazz musicians Charlie Parker himself, Max Roach & Miles Davis, among others. At first, he was a pop singer, launching his recording career on the Roost label in 1949, but later he developed a keen interest in folk music, learning material through the Library of Congress’ American folk songs archives. With guitarist and friend Millard Thomas, Belafonte soon made his debut at the legendary jazz club, “The Village Vanguard.” In 1953, he signed a contract with RCA Records, where he stayed for nearly 20 years.

Today, Harry continues to serve his community and world through continual activism efforts, while never passing up a moment to perform and celebrate the joy that his music brings.

Today, Dana Owens, a.k.a. Queen Latifah is a multifaceted entertainer who is one of the strongest pioneers for women in hip-hop music.

From her early start in rapping, to becoming a versatile businesswoman, she’s managed to achieve much success while opening doors  in the entertainment industry for other women to walk through.

In the latter part of her career, she has produced films, hosted her very own daytime talk show and become one of the most versatile and inclusive models for CoverGirl Cosmetics. For her work, Queen Latifah was also honored with her own star on the Hollywood Walk of Fame in 2006.

Download our lesson plan and transcript, as heard on air, written by B~Free.

In total, Hall & Oates had 34 chart hits on the US Billboard Hot 100 list. They have been inducted into the Songwriters Hall of Fame and the Rock & Roll Hall of Fame. In 2016, the duo received a star on the Hollywood Walk of Fame.

This year marks the 50th anniversary of the partnership between Daryl Hall and John Oates and they are plotting a new album.

Download our lesson plan and track listing, as heard on air, written by Britney Freeman-Farr.

The Beastie Boys altered the direction of popular music at least three times, and lived to tell the tale. From their 1986 debut album to their final release in 2011, the boys and their music prominently dwelled in the world of alt-rock, while introducing the hip-hop genre to the suburban masses. Music critics of today still cite many of their projects as pinnacle examples of hip-hop’s golden era of sampling.

In 2012, the group suffered a terrible loss when Adam “MCA” Yauch unfortunately passed due to cancer. Many members of the musical community expressed their sincerest gratitude for Adam and their work of the group as a whole. They became the third rap group to be inducted into the Rock & Roll Hall of Fame in that same year.

To date, The Beastie Boys have sold 20 million records in the United States, making them the biggest-selling rap group since Billboard began recording sales in 1991. With seven platinum-selling albums from 1986 to 2004, the Beastie Boys were one of the longest-lived hip hop acts worldwide.

Download our complete lesson plan with a transcript of today’s lesson as heard on-air, written by B~Free.

Today in School of Rock, we are traveling to Iceland to learn about Bjork! She truly defies any musical genre with her eclectic and experimental music.

Bjork is Iceland’s first big international pop icon and she went on to wow people from all over the world, recognized by  VH1’s “100 Greatest Women in Music,” MTV’s “22 Greatest Voices in Music” and Rolling Stone’s “100 Greatest Singers of All Time”.

Among her musical accomplishments, Bjork has become an environmental activist and founded Nattura, a nonprofit which promotes nature and grassroots industries in Iceland. She also started a fund called BJORK, supporting the creation of sustainable businesses.

Download our complete lesson plan and playlist, as heard on air, here.

Today’s session starts with a trip across the Atlantic Ocean to learn about a British singer-songwriter and actor, considered one of the most influential musicians of the 20th Century. We are talking about the man, the rock star, Mr. David Bowie!

During his lifetime, his record sales — estimated at over 100 million records worldwide — made him one of the world’s best-selling music artists. In the UK, he was awarded 10 platinum album certifications, 11 gold and eight silver and released 11 number-one albums. In the U.S., he received five platinum and nine gold certifications. He was inducted into the Rock and Roll Hall of Fame in 1996.

Our lesson for today will focus on an American singer, actress, and record producer. She went from leading one of the top-selling girl groups in music to sustaining her own very extensive solo career, and she has released music in many genre, including R&B, soul, disco and jazz. We are talking about the famed diva, Ms. Diana Ross!

Diana Ross has withstood the test of time as a performer with a career that continues to span more than four decades. Her full discography consists of a total of 24 studio albums and 115 singles, with six of those reaching number one on the charts. It should also be noted that her success reached international levels, as well. She has had a top-10 UK hit in each of the last five decades. She has sold over 100 million albums worldwide and has won several major awards, including a Golden Globe, a Tony and several American Music Awards. Ross was also inducted into the Rock & Roll Hall of Fame in 1988 as part of The Supremes, received a Grammy Award for Lifetime Achievement and has received the Presidential Medal of Freedom from Barack Obama.

Today, she continues to tour and perform all over the world, all while maintaining her Diva status as one of the top-selling women in music of all time. Ross just celebrated her 76th birthday yesterday, which is a phenomenal thing so a very happy birthday goes out to her, indeed!

Elvis Aaron Presley was born on Jan. 8, 1935, in Tupelo, Miss., to Vernon Elvis and Gladys Love. When Elvis entered first grade at East Tupelo Consolidated, his teachers regarded him as “average.” A few years later, a schoolteacher was impressed with his rendition of Red Foley’s country song “Old Shep” during morning prayers and encouraged Elvis to enter a singing contest. The contest, held at the Mississippi – Alabama Fair and Dairy Show in 1945, was his first public performance.

Elvis never received formal music training and could not read music so he studied and played by ear. He frequented record stores, listened to the regional radio stations and was a regular audience member at the monthly All-Night Singings downtown. By the time he graduated from high school in 1953, he had already singled out music as his future.

Aretha Louise Franklin was born on March 25, 1942, in Memphis. She was the fourth of five children to the famed Baptist preacher Reverend C. L. Franklin and her mother, Barbara Siggers Franklin, who was a gospel singer and pianist herself. Growing up in this environment exposed Aretha to a great deal of music, and her talents became apparent at an early age. She was largely self-taught and regarded as a “child prodigy” when others discovered that she was a wonderful pianist with a very powerful voice.

In the span of her music career, Aretha sold more than 75 million albums worldwide. With 18 Grammys under her belt, Franklin remains one of the most honored artists in Grammy history, ranked among the likes of Alison Krauss, Adele and Beyoncé Knowles. Among her final recordings are notable covers such as Adele’s “Rolling in the Deep,” which was featured on her album “Aretha Franklin Sings the Great Diva Classics,” released in October 2014. Tragically, we lost Aretha in 2018 but her contributions to American music will continue to establish her as the one and only “Queen of Soul.”

Kenny Rogers was one of the most popular country singers of all time. Sadly, he passed away on March 20, 2020 at the age of 81. So it seems like the right time to honor him – by getting to know more about him and his music.

Kenny Rogers kept making music and touring – and remained popular around the world – until he retired a couple of years ago. In all, he won three Grammys and just about every award given to a country artist, including induction into the Country Music Hall of Fame.

His final concert took place in Nashville. It featured an all-star lineup of singers from country and pop music – including a special appearance by long-time friend Dolly Parton, who performed “Islands in the Stream” with Rogers for the final time.

To kick off our School of Rock session, we’ll be discussing considerably one of the most gifted individuals to ever grace this earth. A man of many talents that ranged from singing, writing, playing instruments, producing and starring in movies; we are talking about none other than “The Purple One” known as Prince.

In this lesson, we talk about the life and artistic journey of a generally self-made, self-taught musician from the Midwest, who took chances on himself, his work and his career all for the belief of making good music. It’s important to note that his creativity also spread to others as he wrote for and collaborated with a number of artists from Chaka Khan and Stevie Nicks, to Madonna and Janelle Monae.

Unfortunately, we suffered from a terrible loss in April of 2016 with his sudden passing, but the impact of his life is still felt and celebrated by many. Some would say that the story of his career promotes the idea of courage, creativity, truth and individuality. These have all been important examples for anyone looking to establish themselves and their identity; in life, music and much more. More than anything, we are thankful for his presence and for his musical contributions to the world.