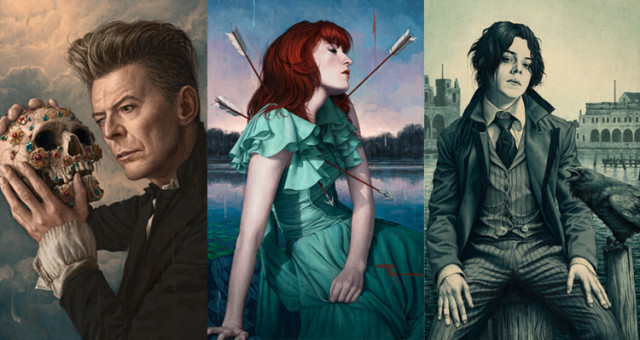 His illustrations – of popular musicians, TV shows, movies and various topics – have appeared in publications such as Rolling Stone, The New Yorker, Entertainment Weekly and more.

Rory has lived in the Milwaukee area most of his life. After a stint as a photographer, Kurtz transitioned into editorial illustration.

We recently sat down for an interview with Kurtz, to ask him about how he got into illustration, his process and his illustration for David Bowie’s last album.

Below is an edit of our conversation. Click on the player above ^ for the extended interview.

I’m an editorial illustrator. That means I work mostly with magazines and periodicals. One of my favorite clients is Rolling Stone. I tend to work in their review section. With every lead album review, they release it with an illustration and it’s been that way for many, many years. So, it’s sort of become this classic showcase for illustration talent. It’s always interesting, they come with different musicians – but I don’t get to pick that, it’s not the way it works.

I feel like I’m part of a little bit of history of each of these musicians.

How does it feel to continue this tradition?

It’s awesome.  They come to me and ask me to do this and I feel like I’m part of a little bit of history of each of these musicians. You know they’re looking at it. You know Florence + the Machine or The National, whomever, they gotta know right away what Rolling Stone says about their new album, they’re curious. They’re the magazine for music reviews.

Have you seen artists share your images on social media?

5 Seconds of Summer, those boys put it up on Twitter right away. With Fiona Apple, I think it got shared a bit on her social network. Fans of those musical acts end up being the ones who move it. I did Pearl Jam a couple years ago. They’ve been around for so long, they have such a big, loyal fan base. When those guys got a hold of it man, it was in every Pearl Jam fan board. I hope the artists are into it and flattered by it. But if you think about it, if somebody painted a really great portrait of you – would you go online and talk about how beautiful it was?  I don’t know if that’s hubris, or vanity or what, but it’s the fans that really get things really exciting. When they like it, then I feel like my job’s been done really well.

How did you move from photography to illustration, or were you always doing both?

I moved to Chicago to be a photographer back in 2007. In hindsight, that wasn’t the best time to make a big leap like that, given where the economy was headed. The recession kind of dismantled my entire client list. I was at a loss as to what to do next. My fiancée at the time, my wife now, said, “You should really do Illustration. You can draw and you enjoy drawing.” Looking back on it, it seems like a weird choice to make. It’s the middle of the recession, being a photographer isn’t working, so why not be an artist? [laughs]

Your work looks very painterly. Do you use digital, traditional or a combination of both?

I use both. I use every tool at my disposal. When I started it was a lot more traditional. This is a business, so it’s all about maximizing time. Deadlines can be really short, some as short as 24 hours. So you don’t have time to work through a bunch of charcoal roughs, and then whip out the acrylics and scan it in, alter it, and send it out.

The final product is digital, that’s how they want it. Very few of us are actually submitting original paintings.

I don’t want to lose that traditional feel to it, which I feel is really important. The problem with digital is there are no accidents. We all start with watercolors, which is ironic, because watercolors are one of the most difficult mediums to master. It’s got a life of it’s own, water is just going to spread out and do what it wants. You’re responsible for about 25% of the painting and the medium itself is responsible for the other 75%. That’s what makes it really interesting to look at are these accidents, the improvisation that the medium offers.

With digital, it’s the complete opposite. Nothing happens unintentionally. So you’re making choices based on every pixel in the image. I think that’s why the human eye rejects it, as not feeling natural. Everything looks a little too crisp. So what I try and do is bring in more of that natural improvisation back to it. I try to paint the thing with my eyes closed first and see if I can get some accidents. Then I go in there and try and be more visceral and improvisational, and I just play my music and try to tear it apart a little bit so I still get some happy accidents and some weird dabs of color.

Florence and the Machine illustration by Rory Kurtz

Are you listening to the music of the person you are portraying?

I always start by listening to it. If I can get a hold of any of the music that’s on the new album, then I’m killing that. I do some research; watch some music videos that are recent, if I can. If it’s an artist I like, then yeah, I’m killing it all the way through. I listened to Florence + the Machine non-stop for 11 days and loved every minute of it. God, that woman’s voice is amazing. There are some artists I would like to paint, just so I can have the excuse to listen to nothing but them for a week.

I’ve gotten to scratch a few off already. Jack White… c’mon! Who couldn’t listen to Jack White for a while? Radiohead. I try to think about the anthology of music there. Lately, Phantogram is my jam. In the dead of winter, somehow it makes sense. This sonic howl from beyond the grave; I really like the female vocals with them. Jamie XX, who’s big right now. I love The XX and I love Jamie XX even more. He shocked me when he started dropping his own music. That song, “Loud Places” – the summer jam of 2015. Those are a handful I’d do anything to paint them. Maybe I’ll get the chance.

You did get the chance to paint David Bowie recently for his “Blackstar” album. Can you talk a little about that process? And getting the news of his passing after the fact?

I remember watching the video for “Blackstar,” the title track. I watched that the week before it dropped and I remember thinking to myself, “what a bummer that I don’t get to paint David Bowie, because this is probably his last album. They probably have already given this job to somebody, what a bummer.” Then I get the email from Matt Cooley [an Art Director at Rolling Stone].

I’m texting my wife, “You’ll never believe who I got!” and she loses it. We’re both losing it. Then I play his music non-stop for a week and a half while I did it. I went all the way back. He’s got so many great songs.

How did you land on this Hamlet-esque image? [The Rolling Stone illustration for the review of “Blackstar,” which was released just prior to Bowie’s death]

I had this theory about “Blackstar,” which maybe in hindsight wasn’t too far from the truth. But I watched the short film [music video for the title track] and it starts with this alien-esque woman walking towards this astronaut’s body, which has long since decayed on this weird alien terrain. Inside the suit is this skull, and it’s covered in jewels. It’s very antiqued; it’s been there a very long time. She walks it back to whom we assume are her people, her alien tribe.

They get a hold of this thing and put it in a glass box and stick it on a pillow and start worshiping it. I started to get the idea that this is Major Tom. This is where his journey ended. Maybe this is where he landed. Maybe he was abandoned here all these years. Now he’s worshipped as a god because on that planet, he’s the alien. He becomes the celestial being from the stars, the Blackstar.

I kind of saw it as Bowie’s funeral march for Major Tom. I just thought I wanted a really intimate moment between this character he created, Major Tom. David Bowie gave birth to him. So, I pictured this intimate moment with him and Major Tom sort of contemplating his own mortality, staring at this legend that he created who is now long since died. Visually it all came from the video. The skull, the outfit he’s wearing, the hair… it was so strongly art directed that it was easy to pull from it. Then I just had to pull together the reference material to make it really sing. So that’s where the image came from.

I was really excited when it dropped and of all the pieces I put out there on the internet. That one, man… that one just grew legs and started moving all over the place.

You can view the online portfolio of Rory Kurtz here: http://rorykurtz.com/

Click on the player above ^ to listen to the expanded interview.