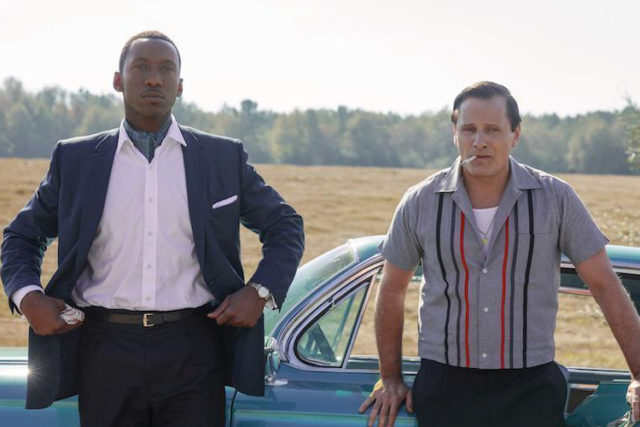 The plot: Dr. Don Shirley (Mahershala Ali) is a world-class African-American pianist, who is about to embark on a concert tour in the deep south in 1962. In need of a driver and protection, Shirley recruits Tony Lip (Viggo Mortensen), a tough-talking bouncer from an Italian-American neighborhood in the Bronx. Despite their differences, the two men soon develop an unexpected bond while confronting racism and danger on the road in an era of segregation. In the film, Doc’s record label gives Lip the titular “green book,” which refers to the real-life “Negro Motorist Green Book” published from 1936-1967, written by Victor Hugo Green.

This movie is based on the true story of a trip that acclaimed virtuoso Don Shirley took with his driver known as Tony Lip, though much of the movie ended up being untrue. And don’t just take it from us—take it from Shirley’s family themselves.

For a movie that frames itself to be about Don Shirley and his experience as a black man at the time, it ignores much of who Don Shirley actually was–not only a musical genius, but a civil rights activist who knew Rev. Martin Luther King Jr. and marched in Selma in 1965.

“Green Book” mentions none of this, nor does it even feel like Shirley is the main character. Instead, it turns into a movie about Lip. The film has him doing most of the talking and character development.

That’s what made the film a poor representation of the true story and steered it into white savior territory.

Shirley is portrayed as cartoonish and without much of the intelligence or agency that this brilliant man actually had, while Lip is portrayed as the hero for going from racist to slightly less prejudiced after getting to know Shirley, “protecting” him and “teaching” things to him.

If we had to say anything positive about this movie though, it would be about Mahershala Ali. Though we don’t think his character was as well-written as he could have been, Ali is always a great actor. And he’s apologized to Shirley’s family on behalf of how the film misrepresents him after they took offense. It was a classy move. And since winning a Golden Globe for his role, the family has said they’re happy for Ali.

And yeah, even though we thought this movie was poorly done, there are a lot of people who liked it. It’s winning awards. Critics are divided. We understand this, but don’t agree with it. If you don’t go into this movie with a familiarity with Don Shirley or the white savior trope, you’ll probably like it and come out thinking it’s a feel-good story about overcoming racism. But when you gloss over reality, stories like this can be more damaging than uplifting.

Why 'Green Book' got the real Dr. Don Shirley all wrong
Just because Peter Farrelly, the director of “Green Book,” also directed “Dumb and Dumber” and “There’s Something About Mary” doesn’t automatically discredit this film. But its white savior-ness and inaccuracy does.

We’re 88Nine’s Justin Barney and Milwaukee Film’s Kpolly. We’re buds, we like cinema—we’re Cinebuds. This week on the podcast, we’re talking about “Green Book,” the awards it’s winning and why probably shouldn’t be.

Read more and listen to the full podcast episode below to hear our review of “Green Book” and about some Milwaukee Film events coming up for Black History Month.