‘The Favourite,’ ‘Mary Queen of Scots’ and a discussion on Oscar bait

‘The Favourite,’ ‘Mary Queen of Scots’ and a discussion on Oscar bait 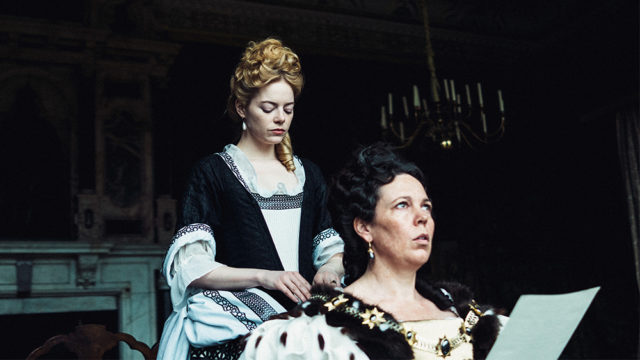 The plot: It’s the early 18th century. England is at war with the French. Nevertheless, duck racing and pineapple eating are thriving. A frail Queen Anne (Olivia Colman) occupies the throne and her close friend Lady Sarah (Rachel Weisz) governs the country in her stead while tending to Anne’s ill health and mercurial temper. When a new servant Abigail (Emma Stone) arrives, her charm endears her to Sarah. Sarah takes Abigail under her wing and Abigail sees a chance at a return to her aristocratic roots. As the politics of war become quite time consuming for Sarah, Abigail steps into the breach to fill in as the Queen’s companion. Their burgeoning friendship gives her a chance to fulfill her ambitions and she will not let woman, man, politics or rabbit stand in her way.

The Oscars love period pieces. This year, there are two that the Academy will likely be considering: “The Favourite” and “Mary Queen of Scots.”

We’re 88Nine’s Justin Barney and Milwaukee Film’s Kpolly. We’re buds, we like cinema—we’re Cinebuds. This week on the podcast, we’re talking about these two 2018 movies that are set a few centuries ago. Both are in Milwaukee theaters now.

Read more and listen to the podcast episode below to hear about the royal performances in these two films.

The two women are vying for the Queen’s favor, so it’s called “The Favourite.” It’s fun, funny, dark and absurd, much like 18th century aristocratic pastimes (did we mention duck racing?).

It’s worth talking about that this movie was directed by Yorgos Lanthimos of “The Lobster,” “The Killing of a Sacred Deer” and “Dogtooth.” He’s known for making strange and fantastical films. We talked about him in our episode about the weirdest movies we’ve ever seen. But this is his first movie that he didn’t write himself and it’s a little bit of a departure from his normally abnormal stuff. Even so, it maintains his usual high quality of whimsical cinematography and still feels like him.

What makes this film great though is the tooth and nail acting between Rachel Weisz’s and Emma Stone’s character and the hilarious, but smart madness that Olivia Colman portrays (and just won a Golden Globe for). Characters in period films like this are often quite stuffy. But the best part about this movie is the modern acting by Weisz, Stone and Colman. They make us realize that people in the 18th century were probably more like us—meaning just as crazy—than we often imagine. 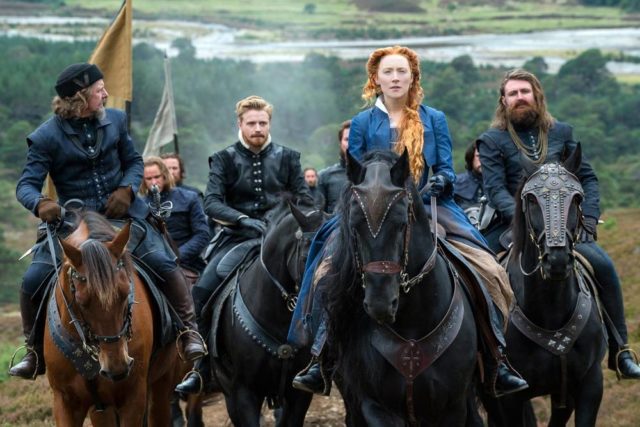 The plot: Queen of France at 16 and widowed at 18, Mary Stuart (Saoirse Ronan) defies pressure to remarry. Instead, she returns to her native Scotland to reclaim her rightful throne. However, Scotland and England fall under the rule of the compelling Elizabeth I (Margot Robbie). Each young Queen beholds her sister in fear and fascination. Rivals in power and in love, and female regents in a masculine world, the two must decide how to play the game of marriage versus independence.

This one is much slower, more serious and more historically accurate than “The Favourite.” It’s a story about inner conflict, external conflict and a whole lot of political and personal tension. However, we didn’t think it rose and fell like we wished it could have. It pushed, it pulled, but it went on forever.

Though it might have felt like dry pacing, we liked this movie and learned a lot. We felt empathy and respect for both of the characters, though for very different reasons. It turns a historical moment that could easily be simplified into a “pitting women against women” situation into a much more complicated dynamic that shows them as very alike, but very different and uniquely kindred allies, but enemies at the same time.

Both of these 2018 period films are up for several awards this season and both are serious Oscar nomination bait, following KPolly’s theory. This is why the Academy loves period films so much—anytime someone plays a real person, overcomes a hardship and is British (or maybe Scottish), they win Oscars. With these two movies, it might be a crowded year, but we’ll be looking out for some well-deserved nominations for these performances by Weisz, Stone, Colman, Ronan and Robbie.