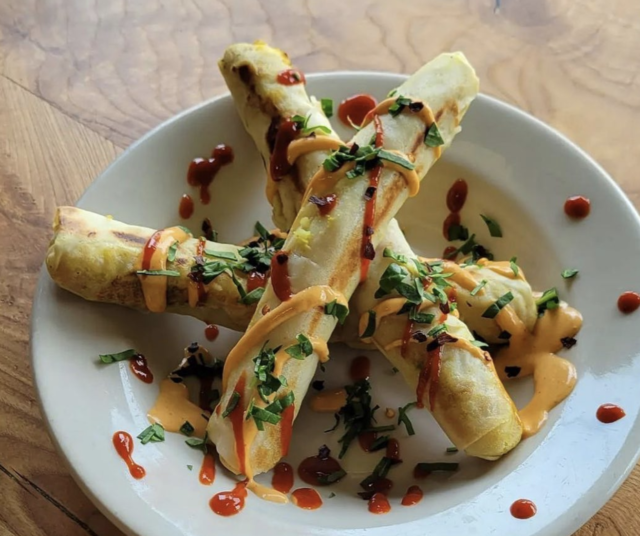 This week we’ve got some great news to share about Dead Bird Brewing’s new Sunday brunch offerings, a new African/Caribbean restaurant on the East Side, a new place coming to the former Trocadero space that fuses Mexican and Italian foods, and the Wisconsin State Fair’s Valentine’s Day cream puffs.

But we kick things off by talking about Funky Fresh spring rolls. Best known for their location in Sherman Phoenix, Funky Fresh has partnered with Palermo’s Pizza. The company has bought a majority stake in Funky Fresh to help the operation grow and to distribute its spring rolls to more people. They’ve started a new company called Funky Villa, which will focus on frozen distribution.

“We’re thrilled to become part of and partner with a legendary food company that has so much rich history in Milwaukee and incredible expertise and success in the food industry. When we started Funky Fresh nearly 10 years ago, our goal was to become a successful frozen food manufacturer. We accomplished that goal during one of the toughest times for small businesses,” Funky Fresh founder TrueMan McGee said in a statement.

Milwaukee’s all-vegan brewery Dead Bird Brewing (1726 N. Fifth St.) debuted its new brunch menu on Jan. 16, and it was such a hit they sold out within two hours. Ann talked to the owners and was truly impressed.

“While the kitchen is limited in size and scope (with just two induction burners and one convection oven), the food menu is surprisingly robust – and, like everything else here, plant-based,” she wrote for Milwaukee Magazine. “It features various street tacos, poutine, loaded nachos and small plates such as blistered shishito peppers with house-smoked paprika aioli ($3-$15).”

The menu also features chilaquiles, a verde wet burrito and a vegan spin on chicken and biscuits. For now the menu is served Sundays from 10 a.m.-2 p.m. The owners are still tweaking the menu, and are considering adding more hours in the future.