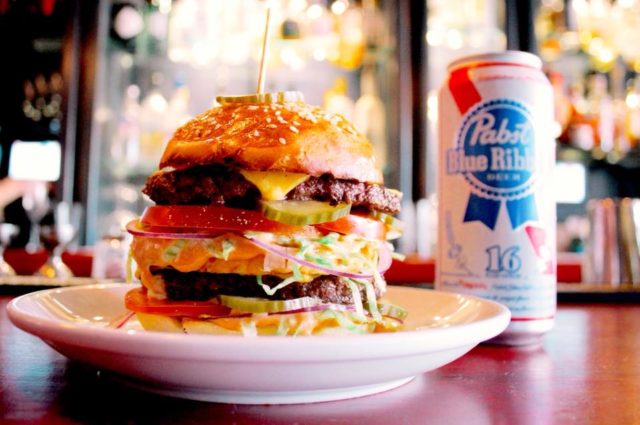 This week we’re discussing where to get the best happy hour burgers in Milwaukee, the most unique food at German Fest, three restaurants celebrating anniversaries, a new mac and cheese place on Brady Street, and the weirdest food at the Wisconsin State Fair. Stream and read about the episode below.

For Milwaukee Magazine, Ann put four burgers available at happy hours to the test. We’re talking about gourmet burgers. Almost all of these establishments bake their own buns in house. Some of them are grinding the beef for their patties themselves, and making their own pickles or special sauce.

Fauntleroy has been offering a grand royal with cheese. It’s in the spirit of a Big Mac, and a good take. But it’s hard to beat The Diplomat‘s spin on the same idea, which Ann gives an A+. The toasted, buttery bun sets it apart. The beef melts in your mouth. The cheese, sauce and tomato are off-the-charts good.

Merriment Social has been offering a happy hour burger for quite a while, and they switch it up all the time, offering fun, creative toppings. Sometime it’s not even a beef burger. But whatever it is, it’s served on a homemade bun and it’s a great value. Yet Ann prefers a burger that Birch + Butcher is offering during its happy hour. They make their patty with ground sirloin and steak trim. They also have a house-made beet ketchup.

German Fest is this weekend, and it’s a chance to try a bunch of traditional foods that can otherwise be difficult to find in Milwaukee. Ann runs down some of them.

Three restaurants are celebrating anniversaries. The Cheel in Thiensville will celebrate its fifth anniversary on Saturday, July 27. They’ll have live music and events for children, and food including spit-roasted wild boar. Closer to home, DanDan is celebrating three years and Fauntleroy is celebrating one year. DanDan’s anniversary is July 30 and will feature a pig roast. Fauntleroy‘s anniversary is the day after, and will run from 4-7 p.m. and will offer diners a complementary trout dish and a glass of champagne.

Then we run down the menu at a new theater offering some surprisingly gourmet offerings, and discuss a new spot on Brady Street opening Sept. 1. It promises to serve 10 oven-fried mac and cheese dishes, with five types of noodles and a gluten-free option. It’ll be called the Mac Shack. And finally the Wisconsin State Fair is just around the corner. We discuss some of its new food options, which include something horrifying called Breakfast on a Stick.