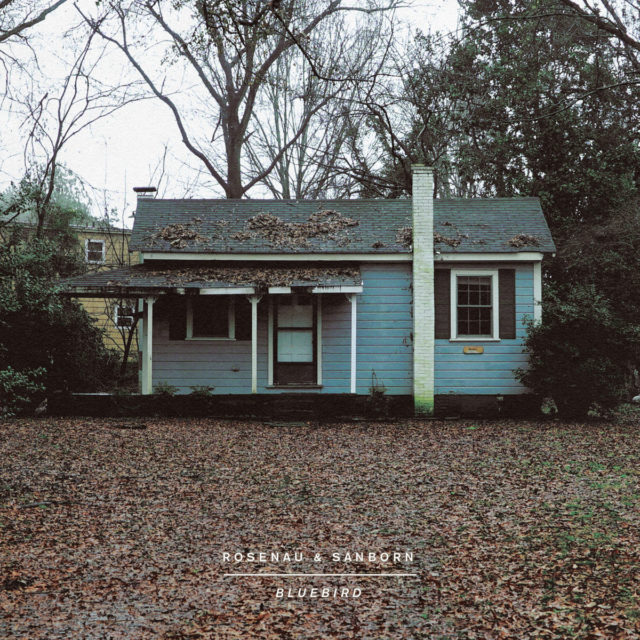 Do you remember Grouper’s 2014 album “Ruins“? It’s one of her finest, uncommonly intimate and filled with tender, aching songwriting. But if you haven’t heard that record in a while, you probably remember the record less for those songs than for one moment in particular: a microwave beeps midway through “Labyrinth,” resetting itself after a blackout during a storm. That beep came to symbolize the album’s raw honesty. She could have used another take. She didn’t.

It’s funny how music works: You can pour your heart and soul into it, bleed for your craft, and yet it’s often the accidents that endure. Rosenau & Sanborn‘s new album “Bluebird” is filled with those moments, those happy little surprises that can only exist when musicians avail themselves to not overthinking it.

On paper, the debut collaboration from the Collections of Colonies of Bees and Volcano Choir guitarist and the Sylvan Esso producer is an extension of the duo’s spontaneous sets at the Eaux Claires festival. But in execution the two ended up documenting a very different kind of retreat. As Rosenau writes in the album notes, they recorded it during a lovely fall weekend in North Carolina. And since it was so beautiful out, they left the windows open in the small house in the woods they were using as a studio.

“We realized that recording with everything completely open to the outside world so strongly evoked the sonics and feeling in the main living room recording space that we decided to embrace it,” Rosenau writes. “We added more room mics, played/improvised/wrote all day for two days straight, and documented it all. It rained, birds chirped, dogs barked, we joked around and we have the fun we had been talking about for years, and it was all captured as we experienced it.”

As a result, “Bluebird” plays like a field recording, albeit one that just happens to be slathered in electronics. Just as Rosenau and Sanborn were happy to bask in each other’s company for a weekend, the album’s songs breathe and luxuriate, in no particular hurry to reach their climaxes and payoffs — though, to be sure, most of them get there eventually. There’s a knockout four-minute song hidden in the album highlight “Saturday,” but we’re much richer for the long, leisurely stretch of an eight-minute version that “Bluebird” gives us instead. It’s the difference between pounding a cold iced tea right in front of the refrigerator or nursing it on a patio chair.

That track ends with a quick exchange between the musicians. One asks the other what they think of the take. The other responds that it’s good, but the ending could be better. Then the track cuts out, and it’s over. We never get to hear the version of the track with the hypothetical better ending, if indeed it even exists. But perfection is beyond the point on an album as peaceful, immersive and inviting as “Bluebird,” anyway. Why focus on sticking the landing when you can live in the moment?

Rosenau & Sanborn is streaming now; you can hear it below, via Bandcamp. The duo will perform Friday, Aug. 9, at the Back Room at Colectivo.