Art-fueled music festival takes its show on the road from D.C. to Milwaukee

Art-fueled music festival takes its show on the road from D.C. to Milwaukee 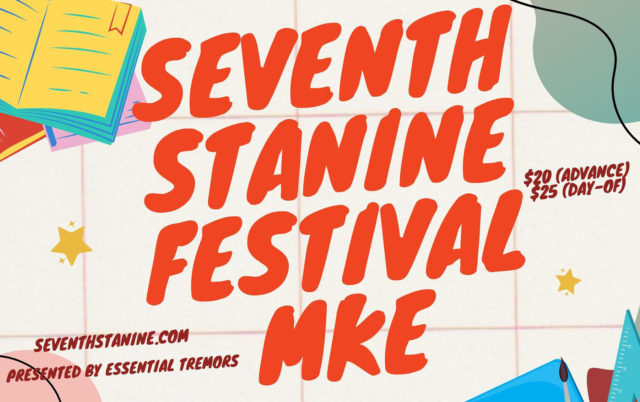 Milwaukee has a very Goldilocks-ish standing on the national touring scene. It tends to occupy the middle ground where, sometimes, artists pass us by the first time around on tour and perhaps swing back on a later leg. So how does a Washington, D.C. festival with five successful years under its belt decide on Milwaukee when expanding its reach?

“Our friend, Kevin Hill, moved to Milwaukee from D.C. three or four years ago,” explained Matt Byars, founder of Seventh Stanine Festival and host of the NPR-distributed “Essential Tremors” podcast. “And last year, when we put it on, he texted me and said, ‘Hey, you guys should do one here.’

“It made sense because we’ve always had a lot of friends in Milwaukee. My band, The Caribbean, was on a label called Hometapes with Collections of Colonies of Bees and All Tiny Creatures … basically that whole family of Justin Vernon-adjacents. We played Cactus Club a bunch of times. Wisconsin has been like a home away from home for us for a long time.”

For the first time, that’s also true of the festival he helped create. A month or so after its annual D.C. shindig, the inaugural Milwaukee installment of Seventh Stanine will take over Cactus Club on Saturday, July 30, with music starting at 1 p.m. and Collections of Colonies of Bees filling the anchor slot at 10:45 p.m. Tickets are on sale now for $20 in advance and $25 at the door.

It’s a significant step for an event with initially modest aspirations: a festival held in the smallest space possible. That’s what Byars had in mind back in 2017 as he and his bandmates started building a lineup of artists they either knew personally or admired from afar.

The inaugural bill went 12 deep, played in the small venue Byars wanted and relied on a suggested donation of $10 for entry. Things grew from year to year, with the latest installment in June welcoming 12 bands and two DJs to an indoor-outdoor space dedicated to the arts in D.C.

Now, they’re taking on a different kind of expansion — one you’d think would cause way more headaches considering it involves recreating the experience in an entirely different time zone. That hasn’t been the case, which is mostly down to the venue.

“The one we do in D.C. is at a place called Rhizome, which is a sort of art-space collective,” Byars said. “You run everything, totally DIY. You run your own sound, you do everything. We get a one-day liquor license to sell beer and all that. So in comparison, I think this will be pretty easy.

“Kelsey (Kaufmann, Cactus Club owner) was really cool with the idea and really interested. It was a weird time to be booking because we were coming out of lockdown, and there was this big glut of bands looking for dates. But (the club) was really great and very accommodating. They’re super-organized with press and communication. Just awesome.”

The relationship-fueled, rock-solid lineup helps. Former labelmates All Tiny Creatures and Collections of Colonies of Bees occupy the final two slots for the day-long event, which features 14 artists who stick to the core idea of that first show back in 2017: playing with no concern for financial gain or notoriety.

“There’s a lot of stuff on the bill that just requires attention and rewards it — that chance to be fully engaged in art in some capacity,” Byars said. “I’m from the Midwest myself, so that always sounds highfalutin using words like that. I apologize. But it’s really true. I just hope that people come and give themselves over to the experience and just let it happen to them and be there for it.”