Brockhampton redefines the boy band for the hip-hop generation

Brockhampton redefines the boy band for the hip-hop generation 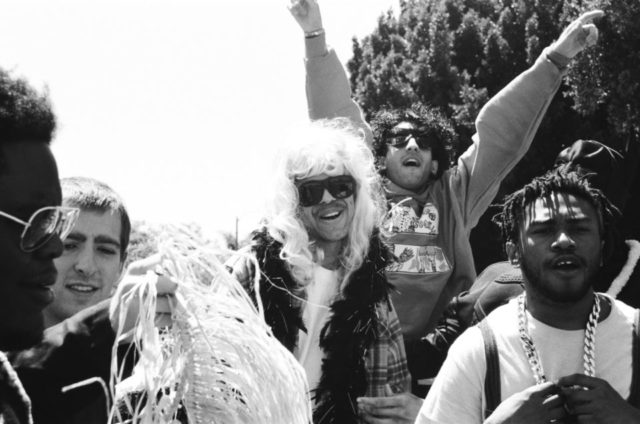 My dad was a troublemaker. Born in the late 1950s, he was the son of immigrant parents from Ecuador. He adopted the rock ‘n’ roll culture of his youth, drawn to its rebel yell.

Growing up in the 1990s, I fell madly in love with hip-hop. Like my dad with rock ‘n’ roll, I was attracted to the audacity of the music.

I’ll never forget the day my friend brought over a cassette tape of ‘Enter the Wu-Tang (36 Chambers).’ We played it so loud that a neighbor complained. When my dad came home he made me go to the neighbor’s front door and apologize. I was in tears after that confrontation, but my infatuation was unshaken.

To this day, my dad does not respect hip-hop, but I still got love for him. By contrast, many of today’s young hip-hop fans and artists have parents who are themselves hip-hop fans — just of a different era.

Back in November, 88Nine hosted an event called ‘Check the Rhyme: Connecting Generations Through Hip-Hop.’ The two-day celebration featured fashion, breakdancers, DJs, and a panel discussion.

Hosted by Tyrone “DJ Bizzon” Miller, the ‘Check the Rhyme’ panel dissected each decade of hip-hop, from the 1970s through the 2010s. The wide-ranging discussion explored the evolution of the culture and music, which is now the biggest genre on the planet.

Last Friday night, my lady and I took her son to see the next big thing in hip-hop — Brockhampton — at the Eagles Ballroom. About 2,000 eager fans turned out for the Milwaukee debut of the Los Angeles-based crew — a show that was originally scheduled for the venue’s 352 capacity room.

Brockhampton is finding extraordinary success by pushing hip-hop culture forward. The boy band — you read that right — is led by openly gay rapper/singer/director Kevin Abstract and includes over a dozen members who live and work together under one roof. Brockhampton is redefining pop music for the Internet age and inspiring young people all over the world.

(Read below for more.)

For almost a half-century, hip-hop has captured the imagination and hearts of young people by challenging the status quo.

“I think about that rebelliousness, that’s what we all love about hip-hop,” Miller told the crowd at the ‘Check the Rhyme’ panel. 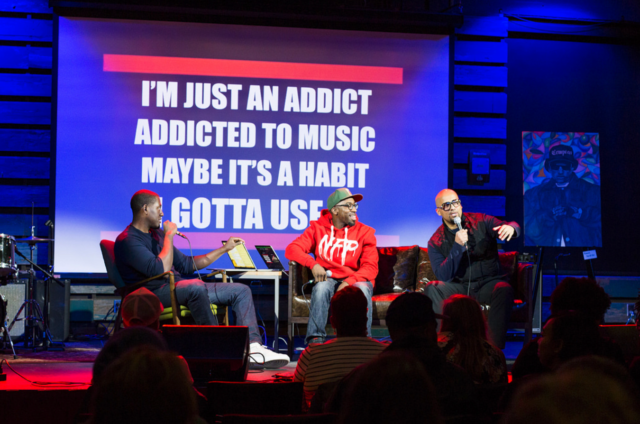 The discussion illustrated how each generation of hip-hop may look and sound different on the surface, but there are shared core values.

During the panel, local DJs JDL & DMT reminisced over Milwaukee’s earliest hip-hop parties at the Crystal Palace. Maanaan Sabir, CEO of the Juice Kitchen, explained how hip-hop inspired him to flip the script on the drug game and sling healthy, all-natural juice. Rapper Genesis Renji spoke of his admiration for outsiders Eminem (a white boy) and Lupe Fiasco (a skater nerd).

Miller alleged that our generational biases are the result of the allegiances we form with the music of our youth — “our coming of age story.” He explained how it is unfair to judge contemporary hip-hop based solely on what is played on commercial radio. That would be like judging 1990s hip-hop on Vanilla Ice and MC Hammer.

The reality is that hip-hop can express any aspect of life — from the mundane to the obscure, the political to the party. The dichotomy between those speaking truth and those chasing trends will always exist. As we get older we simply become less inclined to dig for what resonates.

That said, every so often an innovator breaks through that earns the respect of their predecessors. Kendrick Lamar currently wears that crown, while Brockhampton is the latest upstart to make waves. 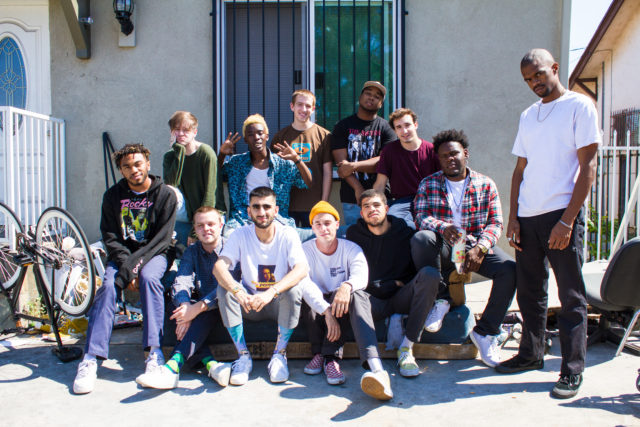 Brockhampton at their house – “The Factory” – in Los Angeles.

Imagine taking the risk of not going to college, not getting a job and moving in with a dozen or so like-minded young artists. Imagine working together towards one big goal, something bigger than any of you thought possible. Imagine traveling the continent with your best friends playing sold-out shows and the coolest festivals. That is Brockhampton’s reality.

Kevin Abstract — the group’s valiant leader — accomplished this feat by enlisting high school friends from southeast Texas and recruiting others on a Kanye West online fan forum. Abstract’s conviction and foresight, matched with the raw talent and camaraderie of his collaborators, has built an empire unlike anything hip-hop has ever seen. 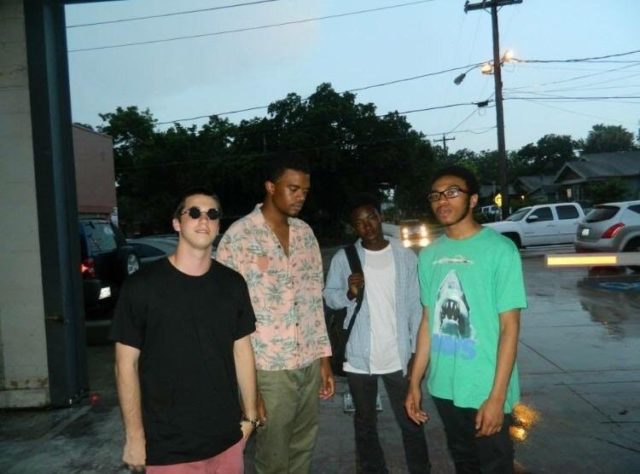 Abstract and his brethren cull elements from a swath of iconic hip-hop artists — Wu-Tang Clan, Chance the Rapper, Frank Ocean, Childish Gambino, among others. But the collective does much more than make music — it is a creative content factory. Abstract cites Apple as a major influence, which is reflected in Brockhampton’s vertical integration. They control each step in the creative process — producing, rapping, singing, photography, videography, merchandising, website design, management, and exceptionally savvy branding and marketing.

Admittedly, the band’s recent surge of success has required a bit of outside help. They are now working with the team that managed Odd Future — another seminal West Coast hip-hop collective. But don’t get it twisted, Brockhampton is much more than OF 2.0.

Despite being a boys club, Brockhampton represents a diversity of backgrounds, nationalities, languages and influences. Their most important innovation may be how members of Brockhampton don’t adhere to a strict definition of culture and taste.

Where once you were either hip-hop, indie rock, alternative, goth, punk, metal, whatever subgenre you identified with, today’s youth allow themselves to like any type of music — including strains of pop traditionally reviled by hip-hop fans.

This is why Brockhampton has drawn so much attention for their embrace of the ‘boy band’ label — and why it is such an ingenious move. 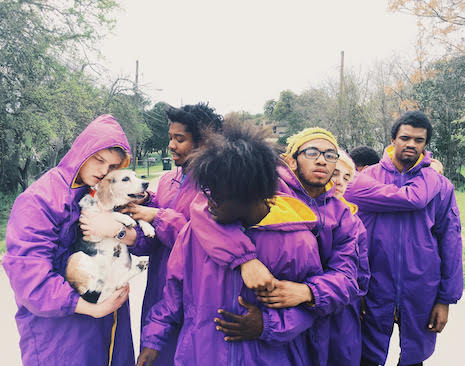 “I like Brockhampton because they’re trying to reinvent the term ‘boy band’ and show it doesn’t just mean a bunch of cis, white, straight men singing on a stage about a girl they love,” says Sirena, a sophomore at Rufus King High School who attended Brockhampton’s Milwaukee stop on the ‘Love Your Parents Tour.’

“They’re saying ‘boy band’ is just a bunch of boys coming together to make music about stuff that’s important to them and stuff they think is important to youth today,” she added.

Indeed, Brockhampton’s confessional lyrics address issues such as racism, anxiety, depression, rape culture, self-love, and sexual orientation. The mere fact that Kevin Abstract is proudly gay is an innovation for a culture historically plagued by homophobia and hyper-masculinity.

Considering the insistence on the ‘boy band’ label, Brockhampton’s TRL performance of the infectious single “Boogie” was perfect. I wonder if it was the main reason MTV resurrected the show.

By deciding to move in together — originally at a house in San Marcos, Texas — Brockhampton bucked the trend of satellite collaboration and redefined the term “bedroom musician.”

Their relocation to Los Angeles owes much to their cinematic aspirations. In 2017, Brockhampton produced a dozen music videos, a short film, and were the subject of a Viceland series. Some critics were dismayed at their productivity, particularly the three full-length records — aptly titled the ‘Saturation’ trilogy — they released last year. 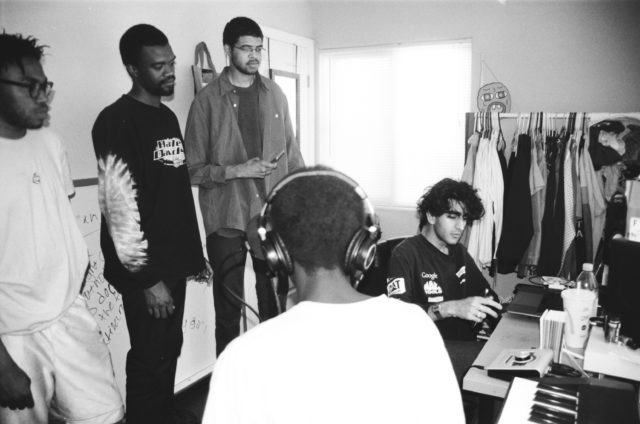 Brockhampton working in The Factory.

But if that was your life and you didn’t have to deal with a label, that kind of output would not be surprising.

Brockhampton’s success thus far has been made possible thanks to a unique brotherhood — a genuine love, trust and respect for each other that was on display last week in Milwaukee, the boy band’s biggest show of the tour to date. 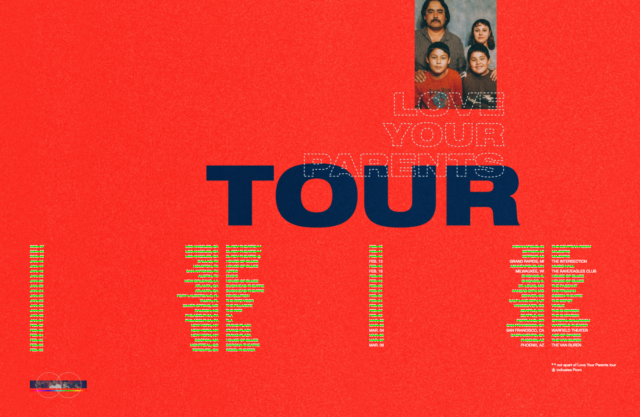 The morning of the ‘Check the Rhyme’ panel I read Ta-Nehisi Coates’ essay “The Black Family in the Age of Mass Incarceration.” With that information swirling in my head during the panel it dawned on me that hip-hop’s greatest legacy may be the triumph of a culture amid the tragedy of historic oppression.

Coates’ latest book — ‘We Were Eight Years in Power’ — includes another essay in which the Atlantic correspondent describes a party at the White House during Barack Obama’s final year in office. Hip-hop artists De La Soul and Common were invited to perform in a venue where their artform was once vilified — a shining example of how far the culture has come.

In the hands of forward-thinking artists like Kendrick Lamar and the members of Brockhampton, there’s no telling what hip-hop will look and sound like in the future — or if my dad will ever come around. 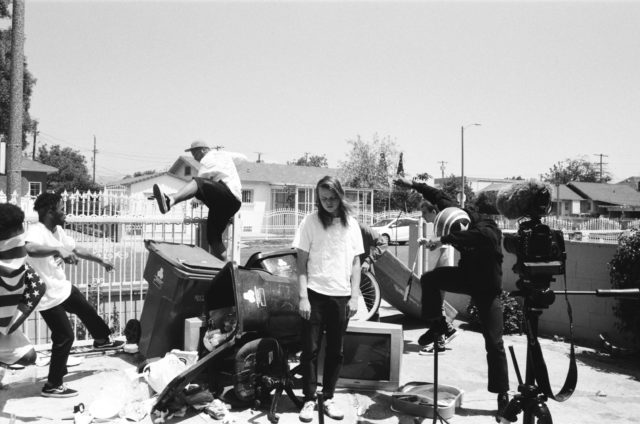