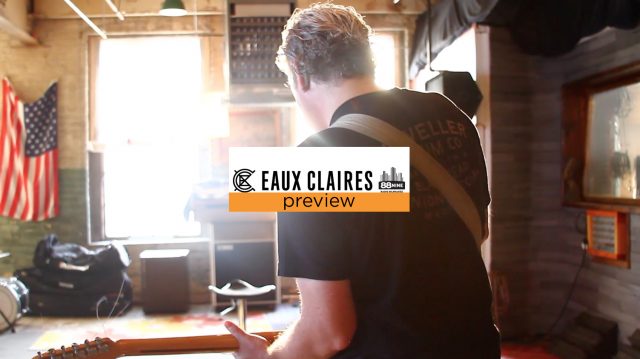 Riding up an industrial elevator tucked in a warehouse on the Kinnickinnic River, strains of layered, twinkling guitar seep in, getting more and more pronounced as the lift creaks its way up to the third floor.

Inside The Tannery studio in Bay View, Milwaukee musician Chris Rosenau feeds three amps and a dozen pedals with just one guitar. We interrupt him briefly to talk about his new solo work, Eaux Claires festival and how he weaves his signature, intricate melodies with his various projects, including Volcano Choir and Collections of Colonies of Bees.

Watch the video below to hear what will make Eaux Claires a unique festival, and a cool step-by-step demonstration of how he crafts his beautiful sounds.

We noticed a tweet announcing a collaboration between Rosenau and one half of Sylvan Esso, Nick Sanborn.

“Within five minutes of Eaux Claires announcing the festival, Nick and I were texting and tweeting with [Justin] Vernon and the creative director, Michael Brown about doing an improv set since we knew we’d both be there.

“I know I will be playing an acoustic guitar and I think Nick might be noodling around with this insane new granular synthesis app he just got. Beyond that, no idea! Which is exactly how we want it.”

Recordings by Chris Rosenau can be found at: https://chrisrosenau.bandcamp.com