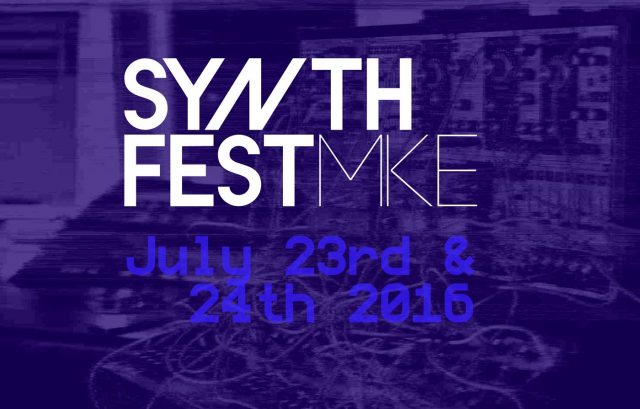 As a fan of electronic music, I find you need to dig deep for shows in Milwaukee dedicated to the genre. Very few festivals in the city feature electronic artists, until now. Synth Fest MKE aims to change that with its inaugural festival July 23 -24 at ACME Records and Cactus Club in Bay View. Tickets for the Cactus Club shows will be $7 individually, and $12 for both nights.

One of Synth Fest MKE’s goals is to promote the synthesized sound as a whole and has curated two full days of musicians and artists spanning a variety of genres.

I asked one of the organizers, Kenneth Sabbar a few questions about the festival.

1. Why did you decide to start Synth Fest MKE?

There was a brief showcase of synthesizer-based music at Cactus Club last year with some friends of mine (titled Midwest Synth Fest) that I attended. Since some of the people involved in that moved away, I thought it’d be nice to continue it on and for it to evolve beyond a single night event. I spoke with some friends of mine, Erik Schoster and Jim Schoenecker who run a monthly series at Acme Records called “Audible Electricity”, about getting involved as well since their series also involves primarily electronic music and we could use the experience from that as well as that community to put on something more expansive as well.

2. What kind of styles of music can people expect to hear?

It’s going to be a wide gamut. We have people who make synthesizers and electronic instruments themselves, which lends itself to being more experimental, and then we have people who make music you might find in a club. We are trying to push the envelope a bit by bringing out music that has existed in Milwaukee for sometime but is perhaps not as well-known.

3. Are all the artists performing from Milwaukee?

Most of them are. We do have a few people coming in from out of state, but the vast majority are locals.

4. Do you have a vision for Synth Fest over next few years?

We hope to continue it on on a yearly basis. I can’t speak entirely on behalf of everyone involved, but I think we’d all agree that we hope to make Synth Fest bigger and better in years to come. In an ideal world, I’d personally like to see Synth Fest evolve into something like what Moogfest does – an event that incorporates more than just music but also brings in people who connect the dots between technology, art, culture, and music.

Check out the schedule and lineup below.