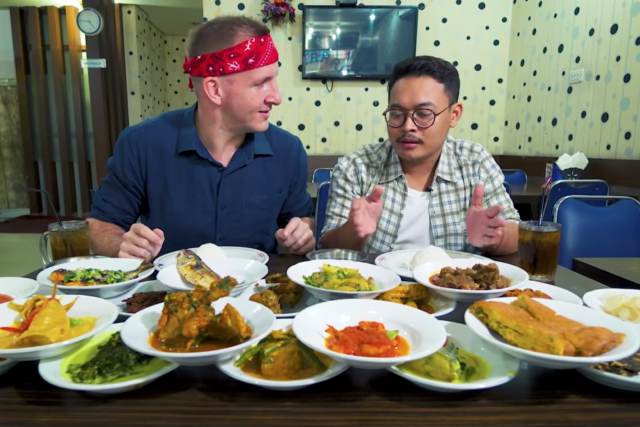 Mark Weins at first glance seems like an unlikely foodie. From his lean build and perma-grin, he simply seems too Ned Flanders to deliver the goods. But as you get into his nuances, part of his charm is that he is genuinely joyful in his food discoveries. His show is less about eating foods that are shockingly different. Instead, he’s more interested in finding out what the people in the countries he visits are genuinely into. As a bonus, he also seems to speak many of the languages of the places he visits and is unafraid of enjoying foods that are a little out there. If food travel was a science, I’d trust his particular math.

We were all sad to lose Anthony Bourdain...but these YouTube foodies might help you hit your food spot

As the man behind Sound Travels, it’s no secret that I am deeply devoted to discovering music from all over the world, but I am equally interested in what the people in these various places eat. In fact, the less I know, the more curious I am—which is why I’ve enjoyed various foodie shows over the years.

I eat, I cook and for a long time, PBS’s lineup of cooking shows did the trick for me—that was until I discovered Anthony Bourdain’s classic “Parts Unknown,” which condensed so many things I love into one package: the travel, the local color and of course, the food and the conversations that condensed it all together.

It goes without saying that I was sad in a selfish way to not be able to enjoy that show with Bourdain’s untimely passing earlier this year. Netflix did put up all eight seasons of “Parts Unknown” posthumously, but it’s only available for another month, ending October 1.

Thankfully, Netflix had a brother’s back and came through with the underrated “Somebody Feed Phil,” a cute show about travel and food (but definitely a step down from Bourdain’s master class). It was somewhere after finishing “Feed Phil” when I realized this whole travel-food thing is a favorite genre for me and I wanted more when it was over.

Thankfully, there are several really cool YouTube channels devoted to it. Here are some great ones I found…

“Best Ever Food Review Show” has a title as generic as it is hyperbolic, but not only have I really enjoyed the work of its main man, Sonny Side, I also discovered Mark Weins through this vlog.

Much like Mark Weins, Sonny’s intercontinental tastes lend well to the travels and foods he tries. There’s a bit more humor to his style, albeit pretty cheeky, and he’s far more likely to shock you by what he eats than Mark Weins, but his channel is nonetheless addictive and worth a try. Be warned, I don’t think I’ve ever seen the man eat a vegetable…

The last one I wanna share is called “Survival Time” and I love it. The first thing you notice is there is absolutely no narration, just the sound of the wind through the leaves, a crackling fire and the sizzling sounds of food cooking. The show’s hosts are a pair of shirtless boys who appear to be somewhere in Asia and despite their relative youth, they expertly prepare foods in the most basic ways possible: food cooked in bamboo logs, atop super-heated stones and occasionally in ways that are more familiar, like over a fire. They tend toward unusual entrees like eel, field crab and the occasional stingray. It’s all done without any pretense and the lack of inane chatter absolutely wins. Every episode ends with the smacks of the pair grubbing on their feast. I dig.