Enter for a chance to win a pair of tickets to see Jidenna!

Enter for a chance to win a pair of tickets to see Jidenna! 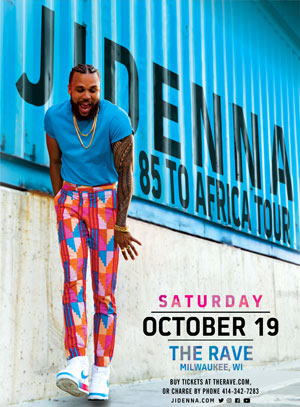 What: Jidenna
Where: The Rave
When: Saturday, October 19 @ 8PM
Tickets & more info: https://www.therave.com/concert_details.asp?id=7111

After dropping a pair of brand new singles, “Tribe” and “Sufi Woman” from his anxiously awaited second full-length album, “85 To Africa” which arrives August 23, 2019, GRAMMY® Award-nominated multiplatinum rapper, singer, producer, artist, and actor JIDENNA announces 33-city fall 2019 tour, including a stop at The Rave in Milwaukee, WI on October 19th.

Hip-hop needed a global voice, but it got a global leader in Jidenna. He rose to the forefront of the conversation with the double-platinum smash “Classic Man” [feat. Roman GianArthur], which garnered a GRAMMY® Award nomination for “Best Rap/Sung Collaboration.” Kendrick Lamar hopped on the remix, and a chopped-and-screwed version appeared in the Academy® Award-winning Moonlight. Meanwhile, his debut The Chief received widespread acclaim from The New York Times, XXL, The Guardian, and more. Extending his influence, he graced the screen everywhere from NETFLIX’s Luke Cage and The Daily Show with Trevor Noah to Insecure.