The humanity behind the heist in ‘Can You Ever Forgive Me?’

The humanity behind the heist in ‘Can You Ever Forgive Me?’ 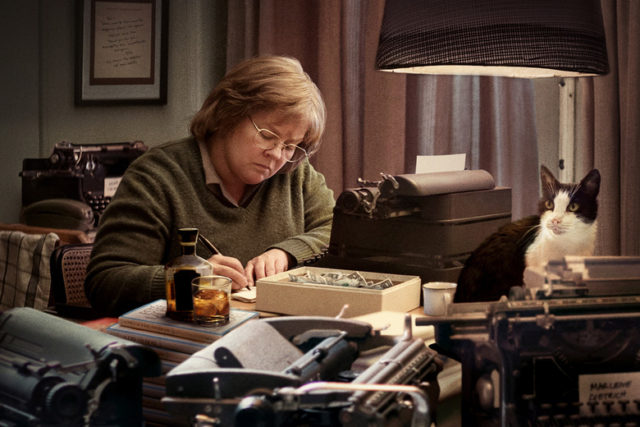 “Can You Ever Forgive Me?” review

The plot: When celebrity biographer Lee Israel’s (Melissa McCarthy) work falls out of style, she turns to deception and uses her art form to forge letters from famous people to make money.

We love when comedians do drama (but not necessarily the other way around) and Melissa McCarthy nailed this role even though it was so different for her.

Her character of Lee Israel is very well developed. She’s a biographer who is embellishing and rewriting the letters of historic figures, essentially rewriting their autobiographies in turn. And throughout the film, she’s essentially telling her own autobiographical narrative about what she calls the most exciting time of her life. It’s poignant—and it’s a true story.

It’s a criminal drama but it’s not too high-stakes, too melodramatic or too funny. It’s kind of a grey area in the middle. Usually that’s not a good thing, but in this movie, we promise it is.

The film is oddly charming and it makes the early ’90s look oddly romantic. We think its partly due to colors of the film, which are very grey and brown because of McCarthy’s dowdy wardrobe and the countless library settings. All of this gives it an overall cozy feeling that matches the on-screen grandpa sweaters and used bookstores.

One of our favorite parts of the film was the difficult but gracious friendship between McCarthy’s character and Richard E. Grant’s characters. They make a sweet, funny and grumpy duo and even better conspirators. This relationship is one of the parts that show what this movie is really about—the complexity and humanity of loneliness.

And something about such a low-risk and low-reward small crime movie is endearing and hilarious.

See it in Milwaukee theaters now.

We’re 88Nine’s Justin Barney and Milwaukee Film’s Kpolly. We’re buds, we like cinema—we’re Cinebuds. This week on the podcast, we’re talking about “Can You Ever Forgive Me?” which is showing now in Milwaukee theaters.

Read more and listen to the podcast below to hear about how ‘Can You Ever Forgive Me?’ made our hearts feel.