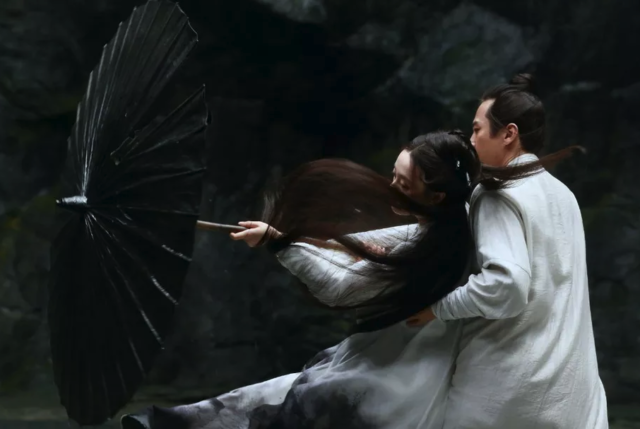 On this week’s episode, we’re celebrating the arrival of the event we’ve been waiting for all year: The Milwaukee Film Festival. The lineup is absolutely loaded, so there’s plenty to choose from, but we’ve narrowed down our recommendations to five picks each. Read about them and hear us chat about them below. (You can find the complete Milwaukee Film Festival daily schedule here.)

Master Chinese filmmaker Zhang Yimou (Hero, House of Flying Daggers) is back with his best film in years, and he continues to be a visual innovator in the wuxia genre. In what almost feels like an ancient Chinese Batman movie, a military leader goes against the king’s will and deploys a shadow look-a-like as a secret weapon in the art of war. Yimou’s action and martial arts set pieces are breathtaking as ever; just wait until you see the umbrellas!

Miles Davis: The Birth of Cool

Few musicians have undergone as many stunning transformations as Miles Davis, changing the sound and trajectory of jazz and popular music several times over. Multi-MFF alum Stanley Nelson (two this year alone) deftly explores the stories behind Davis’ ever-changing sound. Pairing the artistry of Nelson, one of our preeminent documentarians, with the sultry heat of Davis’ music makes for an experience that hits all the right notes.

In an overly colorful, deliciously warped version of suburban America that feels like The Stepford Wives met David Lynch at a lawn party and then snuck off to do acid, writer/director/stars Jocelyn DeBoer and Dawn Luebbe play soccer-mom frenemies in deranged competition with one another. Golf carts, braces, golden retrievers, soccer balls, and yoga teachers all play way bigger roles than you’d expect, and SNL‘s Beck Bennett co-stars in this demented, original vision.

Art and science intersect in the surprising world of taxidermy, showcased through interviews and footage of several different taxidermists. These talented and passionate individuals show how their work takes immense creative artistic skill, meticulous attention to scientific detail, and a passion for preserving nature. While it might seem that those who practice taxidermy are obsessed with death, this fascinating doc shows that taxidermists are actually at the forefront of saving animals’ lives.

A wealthy San Francisco socialite pursues a potential boyfriend to a small Northern California town that slowly takes a turn for the bizarre when birds of all kinds suddenly begin to attack people.

No good deed goes unpunished for Milwaukee native Mark Borchardt, who wrote, directed, and starred as Mike, a writer with severe drug and alcohol problems. Mike finally seeks help in the form of a support group, but soon realizes he’s unwittingly joined a demonic cult. Imagine Midsommar, but with a distinctly Wisconsin setting and black-and-white cinematography that evokes the creepier side of our natural landscapes. This local cult classic will be projected in a 35mm print from the director’s own collection, followed by an extended Q&A.

On the opposite end of the spectrum from Marie Kondo lies renowned artist and photographer Jay Maisel, who spent decades filling up his 36,000-square-foot Manhattan building before having to sell it. What emerges in Maisel’s relocation process is an archaeological excavation into the life of an artist seen through his accumulated treasures. Captured by Stephen Wilkes—one of Maisel’s followers and a noted artist himself— Jay Myself is a love letter to a life spent appreciating the literal small things.

Bong Joon Ho won the Palme d’Or for this dark masterwork—which South Korea already selected for its Oscar entry—about social inequality devolving to class warfare. Ki-woo, the son in an unemployed family of four, is recommended to a high-paid tutoring job for the wealthy Park family, whose patriarch owns a global IT firm. But when Ki-woo becomes entranced with the young lady of the house, an increasingly volatile series of events is set in motion.

Two-time NBA Finals MVP Kevin Durant executive-produced this inspirational look at one of California’s lesser-known basketball teams: the San Quentin Prison basketball squad. Inmates at “the Q” use the team to help them create structure and goals, and for many, it provides a key step in their path to rehabilitation. Q Ball is an emotional tale about how the horrors of mass incarceration can be ever so slightly alleviated by the emotional high of a good sports flick.

The Passion of Joan of Arc

One of the great experiences any cinephile can have is seeing a silent-era classic on the big screen with live musical accompaniment, and there is perhaps no better choice for that treatment than the film that virtually invented the close-up. Carl Theodor Dreyer’s 1928 masterpiece is anchored by expressionistic camerawork and a remarkable performance from Maria Falconetti — the poster child of Sunset Boulevard’s famous “we had faces!” line. Prepare for a transcendent evening of music and film.