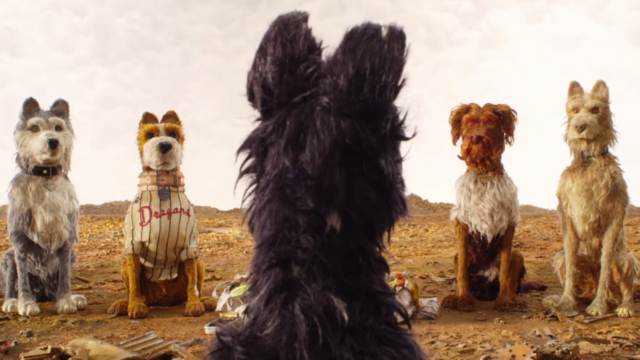 When, by executive decree, all the canine pets of Megasaki City are exiled to a vast garbage-dump called Trash Island, 12-year-old Atari sets off alone in a miniature Junior-Turbo Prop and flies across the river in search of his bodyguard-dog, Spots. There, with the assistance of a pack of newly-found mongrel friends, he begins an epic journey that will decide the fate and future of the entire Prefecture. 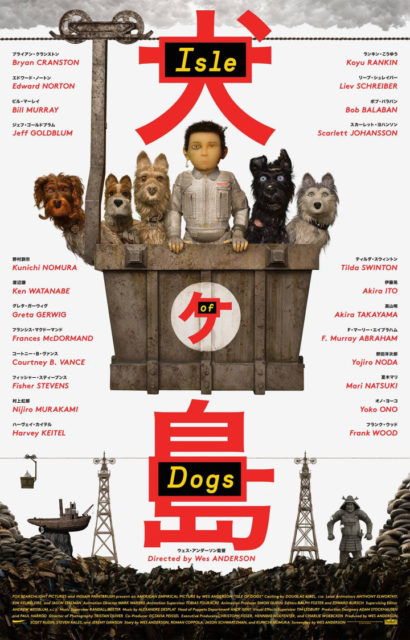 “Isle of Dogs” is funny, artistic and cute (in a good way). It’s themes are familiar and topical to the present day, but the characters, the dogs and the scenes present them in a way that is delightful. Plus, who doesn’t like a story about a boy and his dog?

In true Wes Anderson fashion, almost any of the scenes could be printable artwork you would want to put up on your wall. The figurines and the miniature sets are so well done that Kristopher says that he still would have paid full price to watch the movie without sound. And, both Justin and K Polly wanted to buy figurines of all the lovable dogs after leaving the theater.

With auteur directors like Wes Anderson—that is, filmmakers who are the singular artist who control all aspects of a film—it seems like everyone is all too ready to say that their distinct style is getting old. This film has all of Wes Anderson’s trademarks: the precise timing of dialogue and humor, symmetrical framing and romantic color palettes, but at the same time, this movie is so detailed and calculated it’s hard not to respect and marvel at the craft even though it still has all of Wes’ usual gimmicks. (I mean, is it still a gimmick if it’s well done?)

Also, with auteur directors, there’s a tendency to want to compare one film to all of the others in “the cannon.” But, that’s unfair to the movie and to you as a viewer. It’s hard to avoid, but “Isle of Dogs” is best enjoyed when you do.

“Isle of Dogs” is in Milwaukee theaters now. According to the Cinebuds, it is a must-see for it’s entertaining visuals, not to mention it’s great cast list. And, even though it’s hard not to, don’t compare it to “Fantastic Mr. Fox.”

'Isle of Dogs' is best enjoyed when not comparing it to 'Fantastic Mr. Fox'