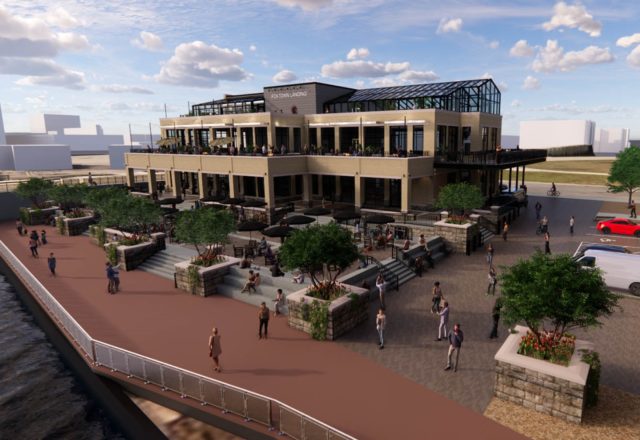 Last August, we found out Downtown Milwaukee would get its first dog park. Today, that park got a little something for its human visitors: a place to grab a beverage and a bite.

Our friendly Urban Spelunker Bobby Tanzilo at OnMilwaukee has been all over this project from day one, and this morning he got two pieces of news from Fromm Nieman Brands:

Fromm has made a fun little habit of coming out of left field with news like this. I grew up in Ozaukee County, where the company was primarily known for its pet-food manufacturing plant that — when the wind was right — made Mee-Kwon Park smell like kibble. So, when I heard in 2016 that they planned to open a brewery in Mequon, the news was unexpected bordering on ridiculous.

Shows what I know. Six years later. Foxtown Brewing is there — along with a restaurant, apartments and single-family-homes, a butcher shop, North Shore Boulangerie’s second location, a bike shop and an event space (that apparently will be something called Bistro de Renard starting next month).

Today’s news brought their ambitions farther south. What was a relatively modest proposal to give Downtown dog owners a long-awaited place to tire their canines has become something far more significant. The announcement added a 28,000-square-foot development called Foxtown Landing that will be adjacent to the dog park and include:

“When we learned about the dog park project, we began exploring the larger opportunity to develop a true ‘dog district’ where people and their pets can gather along the river at the nexus of where the Historic Third Ward and Downtown meet,” Fromm Family Pet Food President Tom Nieman said in a news release. “We see this as a natural fit for us and a game changer for the City of Milwaukee.”

All in, the project should cover 1.4 acres at the corner of Plankinton and St. Paul avenues. There’s no timeline for development right now, but fundraising continues for the dog park portion of the site. You can get more information about that at the park’s website.