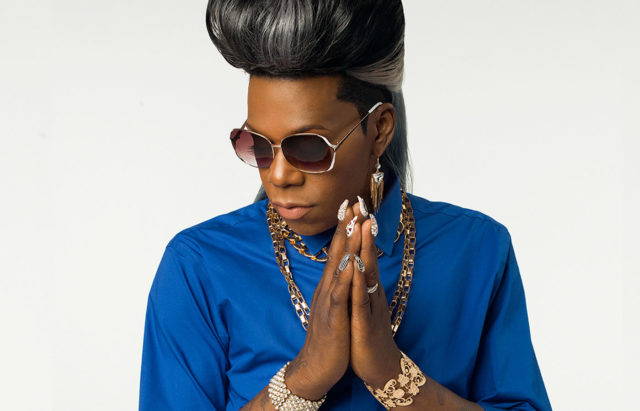 New Orleans’ Queen of Bounce – Big Freedia —  is one of the headliners performing at this year’s Pridefest.

Milwaukee will get a taste of one of New Orleans’ unique sounds – bounce music — a sub-genre of hip-hop.  You could call Big Freedia an ambassador of New Orleans bounce.  She has helped export the sound throughout the country and the world.

While many might know Big Freedia’s music, she is also an amazing cook, especially when it comes to the cuisine of New Orleans. Recently, Big Freedia hosted a soul food pop-up in New Orleans and cooked up several dishes at Buku Music + Art Project. One of those dishes was a take on the New Orleans classic and hangover cure known as Ya-Ka-Mein.

Ya-Ka-Mein can go by many other terms, such as Ya-Ka meat, Yacamein, Yet-ca-mein or Yakimi. Sometimes Ya-Ka-Mein is even called “Old Sober,” which refers to its ability to make one feel better after a long night of drinking.

Basically, Ya-Ka Mein is a type of beef soup/stew served over noodles with an hard-boiled egg and green onions. The history and origins of this comfort dish and hangover cure are cloudy. But it’s been a staple in African-American households in New Orleans for decades.

Big Freedia has been making a version of this magical, culinary concoction called Big Freedia’s “You Already Know” Yaka Meat Stew (aka Twerk-a-Mein).

“My momma made me and my sister and brother Yaka meat as a kid—it’s a standard New Orleans dish. It’s more than just comforting, though. Honey, it cures any hangover or any type of overindulgence you get into down here—and you will overindulge in my city! It’s the perfect dish for your post Mardi Gras blues.” –Big Freedia from a 2015 Slate Article

Here is Big Freedia’s recipe for Ya-Ka-Mein via Slate Magazine.

1) Put 2 tablespoons of the olive oil in a large Dutch oven or other heavy soup pot over medium heat. When it’s hot, add the “chop season” vegetables: onion, bell pepper, celery, scallions, parsley, and garlic. Cook, stirring frequently, until the onion is translucent, about 5 minutes.

2) Season the beef with salt and pepper, then add the beef, soy sauce, and Creole spice blend, along with 3 quarts (12 cups) of water. Bring the mixture to a boil over medium-high heat, then reduce the heat to medium-low, cover the pot, and simmer until the beef is very tender, about 2 hours.

3)Meanwhile, bring a medium saucepan and a large pot of water to a boil. Add the eggs to the saucepan of boiling water and cook for 10 minutes. Fill a large bowl with ice water. Carefully drain the eggs, and transfer them to the ice bath. Generously salt the boiling water in the large pot. Add the spaghetti and cook until al dente, usually 7 to 8 minutes, depending on the package directions. Drain the spaghetti, return it to the pot, toss with the remaining tablespoon of olive oil to keep the noodles from sticking, and cover to keep warm. Peel the eggs and cut them in half lengthwise. Set aside.

4) When the beef is done, reduce the heat under the pot to low. Transfer the meat to a large bowl with a slotted spoon, and shred it with two forks. Return the meat to the pot, and taste and adjust the seasoning.

5) To serve, follow Freedia’s instructions: “To assemble Yaka like my momma did, add spaghetti noodles into a bowl and then swiggle and wiggle some of the beef stew in. Shake with sliced green onion and hardboiled egg on top!”