The 10 most important songs in Milwaukee rap history

The 10 most important songs in Milwaukee rap history 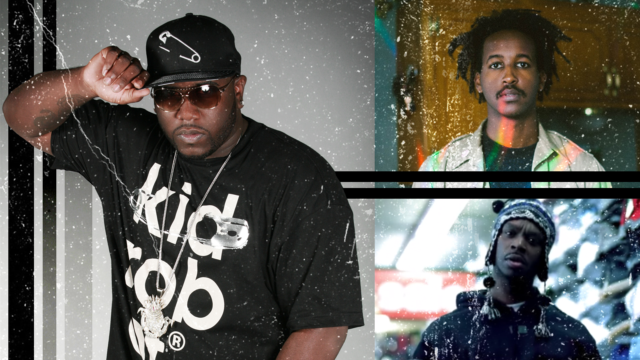 Without spoiling too much, in Radio Milwaukee’s new podcast Backspin, the search for Milwaukee’s first rap song yields an incredible story but a disappointing answer. The city’s first rap song, it turns out, was anything but a labor of love, and it would be years before the city produced a second one. Much of the history of Milwaukee rap reads like this. For most of its run, the city’s rap scene has been defined by false starts, dead ends and dry spells.

The search for the city’s first rap song made us start thinking about other milestone tracks in Milwaukee rap. And so, ahead of this month’s Hip-Hop Week MKE, we’ve compiled this list of the most important tracks in the history of the local rap scene. Instead of ranking them, we’re presenting them chronologically, and as a result they tell a story. These 10 songs chart Milwaukee rap’s slow rise from a niche scene struggling to get off the ground to the booming source of local pride it finally became.

A few caveats before we get into the list: 10 songs isn’t a lot, especially when you’re trying to cover more than three decades of music. So there are omissions. Also we’ve limited the list to songs that are currently available to stream, which accounts in part for the poor showing from the earliest years of the city’s rap scene. And finally, we’re loosely defining “important” as a measure of impact and influence. We weren’t just looking for the most popular Milwaukee rap songs — we wanted to highlight the ones that left a real footprint, the songs that defined their moment or reshaped the scene.

These are the 10 we came up with. We think you’ll be surprised by how well they hold up.

“A-Tack On The Wax” may not be Milwaukee’s first rap song, as the Backspin team discovered while reporting their podcast, but it was the track that jump-started local the local hip-hop scene as we know it. Before he went on to found Arrested Development, Speech was a rapper and producer for the rap crew A-Tack, and his love and knowledge of hip-hop bled through every minute of the group’s debut single. Even better was the track’s sequel, “A-Tack On The Wax Part II,” which doubled down on the turntable showmanship that would come to define hip-hop’s golden age. The beat continually flips and shape-shifts until it builds to an absolutely sick break. There’s a level of vision and craftsmanship on the track that was rare for even major-label hip-hop in 1986, let alone an independent release from a market the size of Milwaukee.

Rusty Pelicans had been a local live draw for a few years before they dropped their most successful 12-inch, but it was “Tread Water” that introduced them to an audience beyond Milwaukee. Credit two guest features from friends the band made on the road for that exposure: “Tread Water” featured Imani from The Pharcyde and its B-side “All I Have” featured Slug and DJ Abilities from Atmosphere. And since those songs dropped around the early days of file sharing, that meant that whenever rap fans scoured Napster or Audio Galaxy for rarities from Pharcyde or Atmosphere, they inevitably stumbled upon Milwaukee’s most popular hip-hop group. Rusty Pelicans’ success sent a message to the rest of the city’s mostly sleepy hip-hop scene at the time: People will pay attention to Milwaukee if you give them something to pay attention to.

Of course we weren’t going to leave this one off the list. Tommy Boy Records scooped up Coo Coo Cal after his 1999 album “Walkin’ Dead” to release his 2001 album “Disturbed,” which yielded the most successful Milwaukee rap single of all time.

In truth, for all its popularity, “My Projects” didn’t move the needle much for Milwaukee. It didn’t turn the city into a rap hotbed; nor did it serve as a launching pad for any other Coo Coo Cal hits. Within a few years, Cal had mostly fallen off the radar, although he continues to live in Milwaukee and record here (last year he released a truly wonderful, heartfelt single about the city called “Home.”) His success turned him into an aspirational figure in the city, though. To this day artists talk and rap about trying to be the first one in Milwaukee to outsell Coo Coo Cal.

Coo Coo Cal may have been the most famous Milwaukee rapper during the ’00s, but Baby Drew was arguably the most respected. He had a big run of local street and club hits over the decade, including a few produced by “My Projects” producer Bigg Hank, the producer who defined the sound of Milwaukee rap during that era. One of those local hits was “Disco Lady,” an update of an old Harvey Scales hit that got so popular it helped Drew land a contract with Universal Records. Nothing really seemed to come of that contract — like so many major-label deals it just kind of fizzled out — but that didn’t diminish Drew’s local standing at all. For a generation of Milwaukee rap fans, he remains a local legend.

Black Elephant was one of the city’s biggest hip-hop acts during an era when that distinction didn’t count for very much. They grinded harder than just about any other act, and thanks to their Roots-esque band setup, they had a better live show than just about any other act, too. That made them perennials at Summerfest, where they dutifully played the role of the local opener for whatever national act the festival had happened to book that year. If you’re at all nostalgic for that early ’00s, Okayplayer sound, it’s well worth your time to revisit the group’s 2004 record “Eat This Album,” and its single “Nutrition,” which still knocks after all these years.

There are some advantage to operating in a hip-hop scene as off-the-radar as Milwaukee’s. With nobody paying attention, you’re free to get weird. And few acts of the 2000s ran with that liberty quite like the duo Def Harmonic, who updated some of the wildest electro sounds of the ’80s on their local hit “Spaced Out.” Even during a down era for local music, a time when even people in Milwaukee didn’t seem all that hyped about the local scene, this boomed out of speakers around the city. It remains a staple of a few local DJs to this day.

For much of the ’00s, Milwaukee’s rap scene was dominated by club music, and in 2009 a pair of local club tracks bubbled over. One was Eastside L Boog’s “Imma Teach U How To Jack,” which helped cement the popularity of a regionally popular style of music called jack, a sort of manic, Soulja Boy-esque spin on house music, only much faster. That track still carries an enormous deal of affection, but the biggest Milwaukee track from that year was hands down Ray Nitti’s “Bow,” a radio-friendly club hit that earned more radio play than any Milwaukee rap song since “My Projects.” Ten years later, the song still lights up dancefloors like nothing else the city has ever seen. It’s still spun at clubs and weddings and during drive-time DJ mixes as often as it was nearly a decade ago. At this point it’s not just a song. It’s part of our city’s sonic DNA.

When you step back and look at Milwaukee’s rap scene, there are moments when the whole city just seems to level up. But it’s hard to think of a greater artist leap than the one WebsterX delivered with his 2015 single “Doomsday,” a gut-punch of a song that felt like the beginning of a movement. In a historical context, “Doomsday” helped spark real outside interest in Milwaukee’s hip-hop scene (as well as a spate of “Hey, Milwaukee has a rap scene” pieces in the national press). But what’s most notable about “Doomsday,” four and a half years later, is how powerful it remains. The whole thing — the song and its cinematic video from Cody LaPlant and Damien Klaven — just hangs together as a beautiful piece of art.

Beef can be a destructive, destabilizing force in any rap scene, but sometimes it pays. Cap Drive Montana’s storied feud with Kushy Kris helped propel both rappers to new levels of popularity. The enduring artifact from their feud, though, is indisputably Montana’s monster track “Extortion,” a phenomenon that became the first Milwaukee rap video to hit a million streams on YouTube. Currently it sits at nearly 1.7 million, and its success helped pave the way for the massive numbers that the city’s street rappers continue to do for this day.

I consulted with the great Milwaukee DJ Doc B for this piece, and even after decades embedded in the local rap scene he couldn’t help but marvel at the song’s impact. “The song is a phenomenon of the sort I haven’t seen since 2 Pac’s ‘Hit ‘Em Up’ or Drake’s ‘Back 2 Back,'” Doc B said. “The phenomenal part is people will rap the whole song start to finish.”

And then of course there’s that remarkable video from Phat Phat Production, a tracking shot that introduces Montana — masked, armed and thoroughly menacing — at the top of a stair case he proceeds to dance down, playing to the camera at every turn. It’s an unforgettable image, and it came to define an unforgettable moment for local rap.

The unspoken heroes of the modern Milwaukee rap scene are the videographers — directors like TeeGlazedIt, Phat Phat, Deniro Gang Ray, Rich Nerds, Randolla and Moosie, whose cameras have become the collective lens that’s introduced the the world to the city. The talent in the city right now speaks for itself, but it’s the videographers that have given Milwaukee’s new crop such a huge audience.

They’ve also given us indelible moments like this one. For “No Hook,” a rare step in front of the mic from a guy who by his own admission isn’t really a rapper, director TeeGlazedIt surrounded himself with an SUV’s worth of rappers — Lil Chicken, Jigg, Mari Boyz, Gwapo Chapo, Looney Babie and WeUpNexxt Fresh among them — for an old-fashioned cypher. In truth, it’s not an incredible song; almost everybody involved has done better work in the last year. But it was still an incredible moment, seeing all these local characters tag-team short verses and feed on each other’s wild energy for four minutes. And for a lot of eyes inside of the city and outside of it, “No Hook” served as an introduction to Milwaukee’s modern class.

So for the tenth and final pick on this list, it only made sense to honor a track that bring us to the present. A decade from now we’ll look back on this moment. By then the city’s rap scene could be bigger than ever, or just as easily it could have faded off the map and fallen into another lull. Some of the rappers featured on “No Hook” will still be around; others will have probably retired from the scene years ago. But regardless of where we end up, we’ll look back on this video and remember how good we had it.

And, of course, if you haven’t checked out Backspin yet, you’re in for a treat. It’s a must-listen not only for anybody who cares about Milwaukee hip-hop, but also for anybody fascinated by Milwaukee history, since it’s as much about about the culture of the city in the late ’70s and early ’80s as it is about rap music. You can listen to the podcast here, or subscribe to it wherever you get your podcasts.