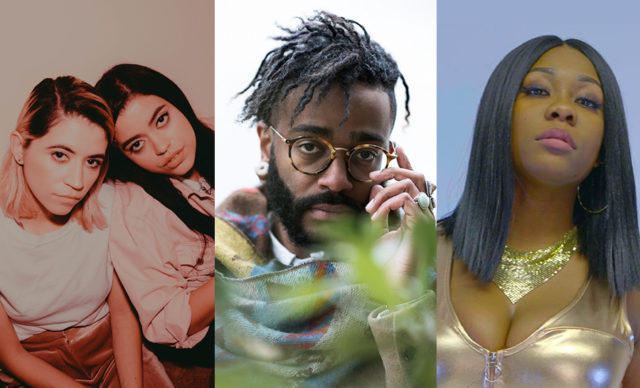 A collaboration between 88Nine Radio Milwaukee and gener8tor, Backline takes a startup accelerator approach to the Milwaukee music scene, providing selected artists with $20,000 grants as part of an intensive, 12-week music mentorship program tailored to each artist’s needs.

And like Backline’s inaugural 2018 class – singer Lex Allen, producer Crystal Knives, soul singer/rocker Abby Jeanne and rapper Zed Kenzo – this one has hit the ground running. The new artists are already midway through their accelerator program. Earlier this month they flew out to Los Angeles to meet with a parade of industry attorneys, producers, managers and label representatives, and later this week they’ll head to New York to do it all over again.

Meet Backline’s new class and learn about their plans for the program below.

Klassik was 10 years old when he began studying saxophone under Milwaukee jazz great Berkeley Fudge. In the years since he’s followed a path quite unlike any other artist in the city, establishing himself as a singer, rapper and producer without losing touch of his jazz background. He’s opened for acts like Talib Kweli, Kendrick Lamar and Ludacris, and in 2017 curated Turner Hall Ballroom’s “Tribe Uncovered” program exploring A Tribe Called Quest. He closed last year by recording his first live album, “American Klassiks,” a reimagining of classic American hymns, spirituals and folk songs.

And like a lot of artists who’ve reached the upper tier of a small market’s music scene, he’s wrestled with whether he needed to leave the city to take his career to the next level.

“This comes up a lot with people in the industry, and I’ve heard both schools of thought,” Klassik says. “That’s one thing I’ve learned, is that the only thing that’s for certain in this industry is that nobody has all the answers.”

But Klassik says that his trip to Los Angeles earlier this month reaffirmed his decision to stay in Milwaukee. “One of the top curators from Apple Music reinforced everything I’ve always believed when he said that you should establish your market at home before you travel out,” Klassik says. ‘That’s something I’ve always believed, but it meant something hearing it from someone like him.”

One other lesson he took away from those meetings in Los Angeles: It’s a fools errand trying to compete with other artists by sounding like them; it’s always better to be yourself. “You have to focus on what makes you special,” Klassik says. “At the end of the day, you are what sets you apart from the masses.”

Kaylee Crossfire still vividly remembers the first time she saw a female rapper take the stage and absolutely blow away the audience. The performer was ShebaBaby, and Kaylee recalls her first thoughts: I want to do that.

Ever since Kaylee has strived to inspire that kind of awe in others. A fierce performer with a diamond-hard flow, she’s opened for artists including Tink and Snow Tha Product and appeared in commercials and the TV show “Chicago P.D.”

And in addition to her own music career, she’s shown particular interest in reinvesting in her community. For the last four years she’s held the annual Female Takeover Showcase, which just hosted its latest installment May 26 at Mr. J’s Lounge. “Every year I’m just reaching into Milwaukee and finding out who are these dope, upcoming female artists and professionals,” she says.

No matter where her career takes her, she says she’ll always be involved in that event. “It’s my baby,” Kaylee says. “I want to keep growing it. The more resources I’m able to get, the more I’ll be able to grow it. This is my way of opening up Milwaukee to female artists; that’s why I created this platform. People always ask, ‘Where are the female artists?’ We’re here! We just didn’t have a platform!”

Backline Program Director Enrique “Mag” Rodriguez says that Kaylee’s interest in mentoring and promoting other artists in her community helped set her apart from the program’s other applicants.

“She’s a perfect example of what we look for in a candidate: A strong leader who empowers the people around her with her showcases, but whose own music is also undeniably good,” says Rodriguez. “She’s a hustler. She doesn’t have a manager, and has never had a manager – everything she’s accomplished has been on her own. We just really thought she had something different to bring to the table.”

The indie-pop duo REYNA may be the most established act selected for the Backline program yet. Since relocating to Milwaukee from Texas, sisters Victoriah and Hannah Gabriela Banuelos (who previous performed as Vic + Gab) have collected some serious feathers under the caps. They’ve logged more than four million plays on Spotify and been featured in Spin, Paste, Nylon and Billboard magazines. They’ve opened not only for Death Cab for Cutie, CHVRCHES, Julien Baker and Kesha, but also President Obama.

“Reyna is ready for a record deal; they’re ready for a label to come in and take them to the next level,” says Rodriguez. “They’re ready to cross over to that next level. So our goal in the program is to give them more mentors in the industry, and to help them figure out what a good record deal looks like.”

Finding them the right booking agent will also be a top priority, Rodriguez says. “Their music stands on its own, but to fully appreciate them you really have to see them live, so they’ll be meeting with many different agencies.”

Rodriguez says that after Backline’s inaugural class last year the program reassessed the qualities it was looking for in candidates.

“I think we learned a lot from the last program as far as what are the ideal candidates for a program like this are,” he says. “The thing that we really looked for – and this is something we learned from the mentors for the last program – was artists who have a strong sense of community.

“In the beginning stages of screening for the the program, we’re basically just looking at the music. But once we’ve established that the music is good, we look at what are they’re doing and the people they have supporting them: What does their community look like, what does their fanbase look like, and what are their goals? We want artists with a strong sense of what they want to be doing not only in six months, but in five years.”

Klassik is evidence of how Backline’s criteria has evolved. He notes with some pride that he applied for last year’s program and didn’t even make the first round.

“I’m like a testament to those on the fence about applying,” he says. “I went from not making the cut to using that as motivation. It was after I didn’t make the cut that I buckled down and started hustling and finished ‘American Klassiks,’ and now I’ve got more shows coming up and I’m getting back into the studio. It’s crazy how fast things can change in a year.”

Artists interested in reapplying, or applying for the first time, won’t have to wait long to do it. Applications for Backline’s fall program open on July 8.

Catch up with Backline’s 2018 class

This spring, three of Backline’s inaugural artists headed to Austin to play the South by Southwest festival for the first time, and Radio Milwaukee’s video team joined them. In case you missed it, you can watch our short documentary about the trip below.