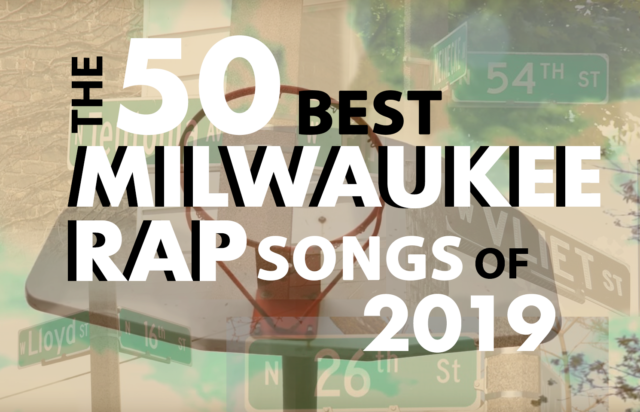 The streets, as a construct, loom large over rap music. But so do literal, actual streets. The lyrics of many of Milwaukee’s best rap tracks this year were dotted with street names — Lloyd, Vliet, Cleveland, Hubbard, Howard, 24th, 54th and on and on — and there’s meaning behind them. Streets reveal a lot about where an artist comes from and how they identify. They can be signifiers of pride and nostalgia, or danger and trauma. Streets tell a story.

No single street, though, can tell the city’s story. Just as you wouldn’t take a visitor to just Teutonia Avenue, Brady Street or Cesar Chavez Drive and pretend they’re experiencing the totality of the city, you can’t sum up Milwaukee rap by any one sound. Like the city itself, Milwaukee rap is a spectrum.

I’ve done my best to capture as much of that spectrum as I could in this year’s list of the city’s best rap songs. There was even more than usual to celebrate this year. The South Side finally began to break out of its bubble and get the recognition it deserves. The North Side kept the momentum up, and began to step out of Detroit’s shadow with wilder, more original sounds. Most encouragingly, women were better represented in the rap scene than ever before. And, as usual, amazing newcomers continued to emerge from every corner.

Some disclaimers: This list is not a measure of popularity; you’ll find tracks that have hundreds of thousands of streams next to tracks that probably haven’t hit a couple of hundred. Also, don’t get too hung up on the order of these rankings. There are personal favorites near the bottom of this list that I love every bit as much as anything in the top 20. With so many neighborhoods and subsets of the scene to cover, my main priority was simply representing as much as I could. One final note: These songs contain strong language and content.

These are the best Milwaukee rap songs of 2019.

How’s this for storytelling? Mudy narrates a brisk tale of an online hookup with a devilish smirk and the suspenseful precision of a Hitchcock thriller.

So much to love here: That buoyant beat, the senses of childhood mischief and maternal affection, those springy verses. This is just a beautifully written little song.

IshDARR is so in the zone these days that even his album bonus tracks are vital.

One of the most limber tracks yet from a rapper who always impresses with how comfortable she is in her own skin.

Imagine rapping this instinctively at 17.

It truly is a vibe.

As if FBE Kash and FBE Savage’s gabby rapport wasn’t enough — and it really, really is — producer Mech comes through with one of his most deliriously kinetic beats.

Auti Marie’s most audacious track yet, which is really saying something.

Some classic East Coast vibes, courtesy of Milwaukee’s South Side.

Zed Kenzo cycled through so many different moods and temperaments over her scattered singles this year, but this track captured her at her most blustery and unbridled. Stick around for that beat flip.

They may be the old guard, but these are still some of the hardest rappers in the city.

Ja Dubb was an aspiring R&B singer before she turned to rap, and that R&B influence imparts some real tenderness into her debut single, a remorseful testimonial about loss, alienation and family divides.

I always admire a rapper who just goes for it. Hakeem Paragon’s latest album, “No Heaven for Heathens,” is his stab at an “Astroworld”-esque art piece, albeit one on a Milwaukee budget. It’s as crafty as it is ambitious.

There isn’t much of this kind of swaggy, melodic rap in the city right now. I wish there were.

Bankhead has punchlines for days.

Only the dankest trap beats will do for BoodahDARR, who raps like a creature from a horror movie even when he isn’t explicitly rapping about creatures from horror movies.

After a stint in Los Angeles, Reggie Bonds returned to Milwaukee with a new sound that reflected his humbled mindset. Gone was the chaotic, status-chasing spectacle of his previous singles, replaced by the naked minimalism of spitters like Ka and Earl Sweatshirt and a newfound sense of social responsibility.

For so many years it felt like boom bap was the only music coming out of the city’s East Side, so my bar for throwback boom bap is exceptionally high. This meets it.

It doesn’t command the cache of darker, grittier rap, but in a lot of ways sunny, happy rap is way riskier. The line between inspiring and corny is paper thin, but Mayyh3m’s beaming sincerity and casually impressive triple-time flow keeps him on the right side of it.

Genesis Renji’s flow is all thought, IshDARR’s is all motion. It’s a combo that works.

If I could make Gwapo Chapo’s pronunciation of the word “instigator” my ringtone, I would.

Mari Boy Mula Mar had so many big tracks this year that I lost some real time figuring out which one to include here. “Tony Snell” and “Dave x Busters” were both bold showcases for his weird melodic instincts and even weirder auto-tune, and they’re probably the best representations of just how outlandishly daffy his vision can be. “Owls” isn’t quite as radical, but it’s the one that refuses to leave my head.

“I had to slow down on the drugs, I’m trying to clear my acne.” Who else is writing bars that honest? MT Twins Donno and Dexxx may carry themselves like stars, but glamour always takes a backseat to reality in their songs, and they write with a candor that’s all too rare.

Dee Mark’s spartan beat casts a dreamy spell while Lil D raps like he’s having an out of body experience. This is a weird, wonderful, heavenly hug of a track.

These two are so rowdy; I love it.

One of the year’s breakout South Side rappers, 3thirtyK casts a chilling presence, detailing his cutthroat storytelling with local landmarks as he doles out one grim bar after the next. “When you live on 94th how you from the trenches?/I grew up around trap houses, pipes and syringes.”

Imagine “No Scrubs,” only 10-times harder.

This is like a vacation episode of your favorite sitcom: Milwaukee slap pioneer LBM Lil Joe goes “Big Willie Style” flossy over a Miami-inspired track. It’s a blast.

Part of why rap is so much fun to follow is it’s constantly siring new stars. Case in point: 54 Baby Trey, who emerged out of nowhere this year with a striking flow and fully formed grim vision. He’s had several huge tracks this year, but it’s hard to top this introductory statement. He was ready right out the gate.

This remarkable video got a lot of praise, but even without the visual accompaniment Von Alexander’s perceptive, slice-of-life storytelling is worth celebrating.

This one’s a sleeper; it’ll sneak its way into your head. K’Moni’s enthusiasm is infectious, and that hook is so buoyant and pure.

Lil Saucy is more explicitly indebted to Atlanta than almost any other artist on this list. Usually that’s a recipe for getting lost in the pack, but Saucy has the melodic ear to match his commercial ambitions. His limber falsetto snakes its way into the crevices of every track.

Lil Tre has a classic rap voice, a smug sneer the oozes superiority, and he floods his verses with so many street names and local landmarks you could almost map them.

Nile takes a break from his usual cerebral boom bap and emerges with a ridiculously catchy four-on-the-floor romp. Never let it be said that conscious rappers hate fun.

He’d been in the running for a while, but this was the year Klassik cemented himself as the poshest rapper in the city.

Another data point for the claim that the South Side is producing some of the liveliest rap in the city. Rockz’s blazing single plays like a carnival condensed into three minutes; even in the dead of December you can practically feel the thick summer air listening to it.

More whimsical crime tales from a duo that’s never encountered a beat or a situation they couldn’t find the humor in. They’ve got some of the best chemistry in the city.

It has plenty of competition, but this combustible, raved-up scrawl is Zed Kenzo’s most undeniable track yet.

Kaylee has been one of the city’s fiercest rappers for a few years now, but it was her stint on the Netflix rap competition “Rhythm and Flow” this fall that introduced her to an audience outside the city. “Baptized” was perfectly timed to capitalize on that exposure, and it’s loaded with titanic bars. “I’m on the top floor probably getting topped off by a top dog while my top off ’til he get lockjaw,” she boasts.

Solowke has already cemented himself as one of the most influential Milwaukee rappers ever to pick up a mic — there are easily a half dozen other artists on this list directly indebted to him. And while “Word Ona Street” is a minor track compared to some of the soft-spoken but loud-rapping provocateur’s previous singles, it’s a total blast, a classic Milwaukee slapper. Ian Goku gets the honor of taking the leadoff verse, and he crushes it, too.

As I alluded earlier on this list, most modern boom bap does almost nothing for me. So much of it feels like a desperate attempt to recapture a moment that’s over, and it often comes on too strong in the process. But this low-key team-up between two of the city’s rising alt-rap greats avoids those traps completely. It’s chilled-out and sure of its charms, and that chorus just glides.

Is it cheating calling this one a rap track? The South Side duo Browns Crew recruited the Buenos Aires band Agrupacion Illegal Los Imaprciales to create the psychedelic cumbia backdrop for this showstopper, a summer celebration that’ll be pumping out of speakers around the city for years to come.

The two biggest breakout Milwaukee rappers of 2019 share a track, and it lives up to the billing. 54 Baby Trey’s flow is so dead serious and grounded while Mula Mar’s is so fantastical that it’s vaguely surreal hearing them play off each other.

I told you there would be more than one Spanish Rice song about chaotic driving on this list. Somehow this one is even more over the top than “Dodging Spike Sticks,” hence it’s even better.

All MT Twins songs bleed, but this one hits an artery. For five soulful minutes, MT and Jigg dish on fallen friends, broken promises, raw wounds and the indignity of being pigeonholed based on from where you came. Lots of rappers touch on these themes, of course, but rarely with this kind of specificity. If you’re going to go there, go there, as the expression goes, and MT don’t skimp on the diaristic details.

The biggest Milwaukee rap hit of the year was also the one that’s the most fun to sing along with in the car. This track broke all kinds of local streaming records, which was exciting. But in all likelihood those records will be broken in turn within the next year or two, so I won’t try to make a case for the song’s importance here. Instead “Fast Cash Babies” leaves behind the best kind of legacy: a good time.

Earlier this year we ran down the 10 most important songs in Milwaukee rap history. We also explored the roots of the city’s rap resurgence in a piece for NPR Music. And in case you missed it, check out Backspin, our six-part podcast about the earliest days of Milwaukee hip-hop. You can listen to the podcast here, or subscribe to it wherever you get your podcasts.