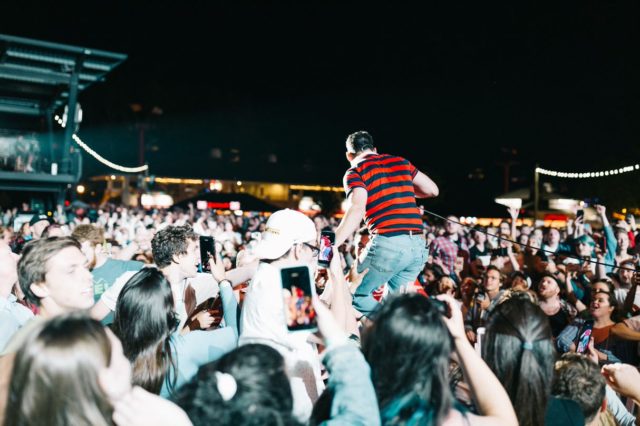 Summerfest’s attendance continued to decline in 2019. Following a surprising drop in attendance last year, when just 766,192 people walked through the turnstiles, the festival reported another drop of more than 6% in attendance during this year’s run.

Just 718,144 patrons attended this year, the lowest tally since 1986. Some of the drop was almost certainly due to matters beyond Summerfest’s control. In a press release sent out this evening at 5:30 p.m. (not typically a time that organizations report news they are proud of), the festival cited the lack of a July 4 amphitheater headliner (two acts canceled due to illness, leaving the amphitheater headliner empty that day) and severe weather.

“Had there been the typical 11 amphitheater openings, festival attendance would be projected at 733,144,” the organization wrote. “Regardless of the attendance figures, the festival was profitable and remains well-positioned for the future.”

It wasn’t all bad news for the festival. The event landed some big gets this year, including Bon Iver and white-hot pop star Billie Eilish, and through promotions the festival raised an incredible 56,500 pounds of food for the Hunger Task Force.

You can read Summerfest’s complete press release, filled with figures and spin, below.

Summerfest hosted 718,144 patrons and over 2,000 artists despite the fact that there were only 10 Amphitheater concerts, and four days out of the 11-day music festival experienced severe thunderstorm warnings late in the afternoon, when fans are making the decision to attend.  Had there been the typical 11 Amphitheater openings, festival attendance would be projected at 733,144.  Regardless of the attendance figures, the festival was profitable and remains well-positioned for the future.

The non-profit organization hired over 2,225 seasonal workers to support the festival, 61% of which are Milwaukee residents. In addition, 305 volunteers provided over 5,000 hours of support for festival services.

Summerfest Tech also made significant strides, growing from three hours to two days, from 60 participants to over 500 attendees, and from one panel discussion to ten speakers, featuring Dennis Hoffman of Dell Technologies, and Grammy-nominated DJ Steve Aoki, as well as a pitch competition with CNBC The Profit star Marcus Lemonis, and a prize of $15,000+ in non-equity funding.

“Summerfest 2019 demonstrates Milwaukee World Festival, Inc.’s continued commitment to a world class experience for our fans. This year, we were excited to host performers like Jennifer Lopez in the completed Phase One of the American Family Insurance Amphitheater $53MM redevelopment.  This show’s production would not have been possible in the past,” said Don Smiley, President & CEO of Milwaukee World Festival, Inc. “We are equally as excited to break ground on Phase Two, which will bring expanded concourses, additional food and beverage options, and more restrooms to our patrons. I look forward to the Grand Opening in 2020.”

Additional highlights from Summerfest 2019 include: