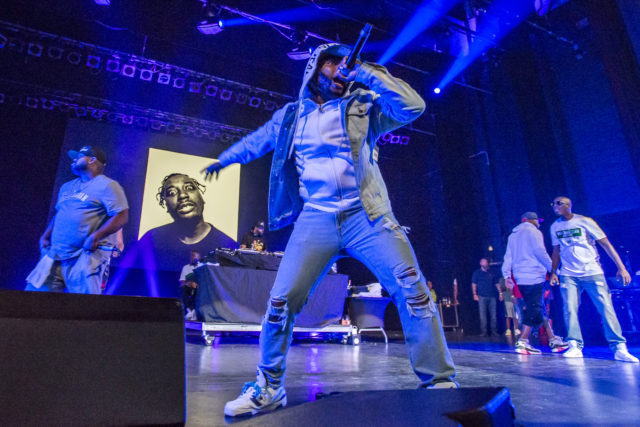 “You cannot destroy the strength of ideas and the Wu-Tang celebrate that,” says filmmaker Jim Jarmush in the 2019 Showtime docuseries “Wu-Tang Clan: Of Mics and Men.”

For 25 years, the legendary Staten Island hip-hop group Wu-Tang Clan have caught the imagination of fans all over the world, spreading their message of peace, brotherhood, and knowledge of self. The Wu-Tang Clan is one of the most influential groups of all-time and their brand extends far beyond hip-hop culture.

Jarmush brought the Wu-Tang Clan to the silver screen in 1999 when he hired the group’s architect the RZA to play a part and create the score for his 1999 film “Ghost Dog: The Way of the Samurai” and, more famously, when he put the RZA and the GZA in a scene with comedy icon Bill Murray in the 2003 film “Coffee and Cigarettes.”

More recently, the producer Cilvaringz recorded a clandestine album with members of the Wu-Tang Clan that was limited to a single copy and sold for $2 million in 2015 to the controversial businessman Martin Shkreli, who was later convicted of securities fraud. RZA explained in “Of Mics and Men” that the project was a way to get the Wu-Tang brand into new markets, though he regrets that Shkreli ended up as the top bidder.

It is understandable then that the Wu-Tang brand is set to enter one of today’s most popular forms of entertainment — streaming television. On Sept. 4 the Hulu original series “Wu-Tang: An American Saga” will make its debut. The series is a fictionalized coming-of-age tale that features contemporary rappers Dave East as Method Man and Joey Bada$$ as Inspectah Deck.

Before the Wu-Tang Clan took the stage on Saturday night at the Riverside Theater as part of their 25th Anniversary tour celebrating the group’s debut album “Enter the Wu-Tang (36 Chambers),” the trailers for “An American Saga” and a new film directed by the RZA, “Cut Throat City,” were projected on the screen above the stage. While these side projects are part of an ongoing effort to preserve the group’s legacy, the performance on Saturday night was a celebration of that legacy.

The RZA, wearing oversized sunglasses, skinny jeans and a denim jacket with frayed cut-off sleeves, was the first to emerge. He looked like a rugged version of the early hip-hop icon Fab Five Freddy. During the set the RZA made a point to describe their sound as “original hip-hop style, from the Bronx in New York,” an interesting delineation considering that hip-hop is now made all over the globe and the sound most prominent in America hails from the South.

For the first half of their set, the Wu-Tang Clan performed “36 Chambers” in its entirety, which the RZA announced at the outset to thunderous cheers. To hear an album come alive in sequential order like that is a diehard fan’s dream come true. Each member made a grand entrance. Despite the well-documented interpersonal tensions caused by business disputes, the members of the group appeared to be enjoying themselves, though none more than the RZA. The “36 Chambers” performance came across as a victory lap for the RZA, who produced the entire record (with a little help from the late ODB and Method Man). The second half of the set featured hit singles from later albums, some turntable acrobatics by DJ Mathematics, an appearance by Wu affiliate Streetlife, and Method Man venturing into the crowd.

“Where it is now, it’s at the point of renewal,” says the RZA in “Of Mics and Men,” while footage depicts ODB’s son getting ready to take the stage with the Clan. On Saturday night, ODB Jr., who was referred to by the RZA as “Young Dirty Bastard,” injected the show with a fresh, youthful energy. No one can match ODB’s uncanny stage presence, but his son gave a dynamic performance, knowing just the right time to spazz out and when to let the crowd fill in the verse.

Nostalgia may have won the night, yet I couldn’t help but think of the current hip-hop landscape and the resurgence of the collective. As the RZA goes on to say in the “Of Mics and Men” clip about renewal, “…because our story is a template for the next group of men.” True indeed, the celebrated “boy band” from Texas known as BROCKHAMPTON have taken Wu-Tang’s template and adopted it to the modern era, showing just how powerful it can be when old ideas meet new ideas.