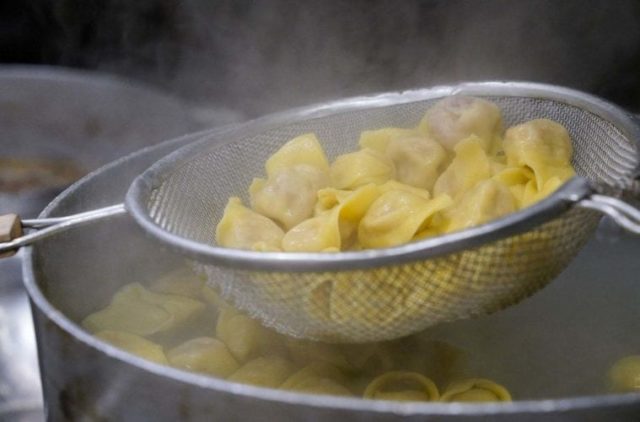 Crossroads Collective has been open since December, offering soup, vegetarian fare, BBQ and more. And in March, it’ll be adding pasta to the lineup.

He says it will be all about people being able to come in to “enjoy handmade truffle ravioli with Parmesan cream sauce in less than 10 minutes… and without breaking the bank.”

Handmade is the key word. They’ll be making pasta from scratch every morning—like by putting dough through a handmade extruder to make linguine, spaghetti and rigatoni, or by hand sculpting pastas like ravioli and tortellini.

But these traditional methods don’t exclusively come with traditional ingredients. Gluten free and vegan recipes will also be available.

And they’ll include a range of fanciness, from mac and cheese to pasta Bolognese.

In honor of Chinese New Year (February 5-19), all of the vendors at Crossroads Collective are doing Asian-inspired specials to celebrate the Year of the Pig. Here’s what each is doing:

Fat Tuesday is also Pączki Day in Milwaukee. Pączki is a sweet Polish donut-like bakery item and here are the The Wisconsin Bakers Association’s Paczki Preview Party is the place to eat and celebrate the pastry.

This event on Sunday, February 24 at the Polish Center of Wisconsin includes a “Paczki Passport” which gets you samples from each of the participating paczki vendors: Cranky Al’s, Grebe’s Bakery, Le Rêve Patisserie and Café, Neat-O’s Bake Shoppe and Sweet Perfections Bake Shoppe.

Cafe Centraal in Bay View was closed for over a month to renovate and innovate. Now, they’ve reopened as Centraal Grand Café and Tappery. They’ve tripled their draft lines for the new and improved beverage program. And of course, these expansions include the menu too. Take a look at the new menu here, which includes a new snacks section, lots of friets and a weekday brunch menu. We can’t wait to try almost everything on here.

February 24 from noon to 5 p.m., the Sherman Phoenix will be participating in a statewide celebration of this hashtag called #HealthierYou. Twisted Fork Vegan Festival is a free event, open to the public where vegans, vegetarians, omnivores and everything in between are welcome. And it’s a good chance to check out the Sherman Phoenix if you haven’t yet.

Soon, Milwaukee will be able to enjoy handmade truffle ravioli with Parmesan cream sauce in less than 10 minutes at Crossroads Collective

Read more and listen to the podcast below to hear more about the pasta bar and Chinese New Year celebration coming to Crossroads Collective, Cafe Centraal’s reopening and Pączki Day in Milwaukee.